"The Abilities of the Shinobi…!!"

Wishing to finish the fight by herself, Tsunade charges passed Jiraiya. Kabuto slits his own wrist to cover her in his blood, immobilising her due to her fear of blood. Naruto is confused, having considered Kabuto a friend the last time they saw each other. Kabuto informs him that he is an Otogakure spy. He adds that he is disappointed with Naruto, as he makes unimpressive use of the Nine-Tails and doesn't even compare to Sasuke. Angry, Naruto attacks him, intending to take advantage of Kabuto's injured arm, but he is easily repelled. Kabuto then heals himself. They all split up; Shizune will fight Kabuto, while Jiraiya will fight Orochimaru, and Naruto will protect Tsunade since Orochimaru and Kabuto are out of his league. Orochimaru, with Kabuto's help, summons two snakes and Jiraiya tries to summon a toad. Still under the effects of Tsunade's drug, he only manages to summon Gamakichi. 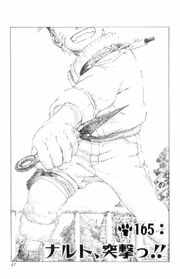