Naruto: Clash of Ninja 2 offers several different game modes such as Arcade mode, VS mode, and Story mode. You can unlock new features such as new characters, stages, and modes by accomplishing certain tasks in the game. Once accomplished, an item will appear in Anko's shop and the player may buy with money earned from fighting. The roster is also notably more updated from Clash of Ninja, where it is more notably praised.

A large notable series mainstay in this instalment is the feature to not only fight one on one, but now 4-way brawls have been added, with characters being able to switch their targets mid-fight, and enabling multiplayer with up to 4 players on field at the same time. Also new are air throws, where certain character are able to throw their foes in midair, though even these can be escaped from like normal throws on ground.

The game follows the plot of the series, in story mode, starting from Naruto's graduation from the Academy to the end of the Chūnin Exams. There are also several fights which may be purchased from Anko that go into detail about things not fully explained in the series.

Another mode featured is "Oboro (Haze) Mode", where the player enters a normal 4-way brawl but they instead engage with haze clones that progressively re-spawn in increasing numbers as more are defeated, making the goal to defeat as many as possible before being overwhelmed.

Critical reaction ranges from average ratings to fairly high and respectable ones. G4's X-Play gave Clash of Ninja a three out of five, claiming that while the game has "slick cel-shaded graphics and strong animation," the game's characters are all somewhat similar and lacks in the two-player department. Mark Bozon at IGN gave this game an 8.2 out of ten, and said that the game is quite easy to get involved in, even for those unfamiliar to the Naruto series. He also praises the game for its easy-to-learn combos and character roster. 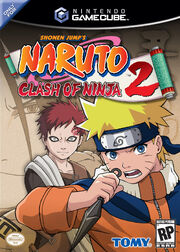