Naruto: Clash of Ninja Revolution 2 is the fourth instalment of Clash of Ninja for U.S, and all 4 of the normal control set-ups for the Wii are usable.

There are 35 characters, including 7 never before seen in a Naruto: Clash of Ninja or Gekitō Ninja Taisen! game. The story present in this game was made exclusively for the game as well. While there is no online, other features include 15 stages, fully animated cutscenes by Studio Pierrot, destructible environments, and the hand seal system from Naruto Shippūden: Gekitō Ninja Taisen! EX 2.

Exclusive to this game and onwards in the Wii sub series are the ability to use explosive tags/paper bombs (even for characters who don't use ninja tools for their strong attacks). Holding down both dodge buttons (which automatically faces the user towards their foe if their back is turned) and pressing the strong attack button enables the player to toss and plant paper bombs at the cost of 25% chakra, though as an added bonus, players can also use the Wii Remote pointed at the screen to aim paper bombs. This new function enables setups of all sorts such as distance attacking and setting up traps to limit screen space (doing the latter allows for them to be detonated manually at the cost of 12.5% chakra by combining both dodge buttons with the weak attack button instead).

Said paper bombs can be used on downed opponents to lift them up to pick them off of the ground for an OTG, or if blocked will force the foe into a hitstate akin to a guard crush animation with the airborne hit functioning the same as being guard crushed in midair (leaving them open to further attacks), and to reset the gravity increase on juggled foes. Paper bombs however, are no different from normal ninja tools and certain projectiles, as they can be deflected. Also note that only thrown paper bombs are unblockable, as they can be blocked if planted on the ground.

Carried straight over from Gekitō Ninja Taisen EX 3, players have the ability to turn off obstacles and stage jumping, the latter of which is also accompanied by tier selection, allowing players to play on either one of the two parts of a stage. This effectively doubles the number of stages from 15 to 30, but leaves players unable to stage jump during a fight; however, this trade-off would obviously be intentional. There are ten missions in the game that are altered and specialised for each character chosen, resulting in a total of 350 missions.

The Oboro Mode from the second Clash of Ninja game now makes a return in the form of Kumite Mode, where the haze clones are replaced by the missing-nin instead. 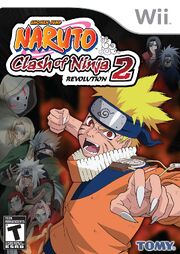