The game's story and roster covers the events from the Sasuke Recovery Mission. However, extra liberties are taken such as the Sound 4 tempting Sasuke's leave whilst Naruto and Sakura are within presence (prompting Naruto to try and stop Sasuke earlier) and Itachi and Kisame getting into scuffles with the Sound 4 beforehand.

The game fleshes out the tag team mode from the last game, referred to as 3-man cell, which allows groups of characters to fight each other in turn. Most of it remains the same, only Gekitō Ninja Taisen! 4 enables certain combinations of team members having special attack combinations (done with forward+special). The 3-man cell mode also enables either 1 on 1, 2 on 2, 3 on 3, 3 on 1, 3 on 2 and 2 on 1, all in one tag mode. The Crisis Special system is also less apparent, as characters' health bars no longer glow or show any indication of some sort when Crisis mode is in play.

The Crisis Specials themselves are also remapped (mainly to down+special button), which however causes them to instead have slightly more startup in trade of being easier to access (if they have the same startup initial blow animation as neutral specials). This is the first Gekitō Ninja Taisen/Clash of Ninja game to feature backward specials with the input "back+special button" (Naruto Shippūden: Clash of Ninja Revolution 3 reuses this concept). However, all possible transformation-based specials/secret techniques are now all mapped to back+special, regardless of the availability of a down+special input for certain characters.

Running dodges have also been added, allowing for an extra mobility option which prevents running from being a 100%-committal option (either they can safely stop running after the dodge, or they can continue running just after inputting it if they are still holding a forward direction). If done up-close underneath an airborne opponent, running dodges can be done to slip quickly under them with the same recovery time as a far-away dodge (sooner action frames).

Also in this game is the ability to perform a Body Replacement Technique with the "dodge left" button to instead teleport out of harm's way back on the ground in neutral state without perform an automatic counterattack, allowing the user to setup their own offence and/or maintain neutral. Using the "dodge right" button instead performs the original counterattack function (which during midair hitstun, can either be tapped alone to perform the standard falling counterattack, or a running attack grounded counter with down + dodge right like normal).

Another step-up from the prior game is the inclusion of a guard metre, shown as a bar with five dots that represents the strength of the character's guard. If a character is not guarding, their guard metre will regain dots/strength over time. Each character in the game's data has their own varying value of guard metre units, with some characters being easier to guard crush than others (normally correlated to their HP amount).

Another new feature to the gameplay of this game is the use of the Chakra Cancel (also dubbed as "Y-Cancel"); a type of anywhere-metre-costing cancel that instantly returns the attacker to neutral state upon any attack landed only on an airborne. This normally costs 25% chakra and is done with the throw button in the middle of a connecting attack; however, any attack that inflicts a sweep knockdown effect, is coded with a mid-airborne state (including ones that can also crush low attacks), an attack that is whiffed, landed on a grounded opponent, or blocked, or any projectile attack cannot be chakra-cancelled like so.

However, upon executing a Chakra Cancel successfully, the user will enter a stance for a few seconds which can be freely cancelled by anything else. Another caveat to Chakra Cancels are that they scale down combos heavier on top of the natural 5%-across-the-board damage scaling for combos in general. The window to execute a Chakra Cancel is when an attack's hitbox is no longer active, which is separate from the ending animation of the cancel-able attack itself.

However, any slight movement used to break the Chakra Cancel-stance will reset its damage scaling for any incoming attack input (holding down the desired direction when chakra-cancelling to achieve this works as well), making this specific stance-cancelling-mechanic especially vital for back-to-back Chakra Cancels in the same juggle combo for higher damage where natural scaling still applies. Thus, this advanced technique is often dubbed as "stance breaking". Regardless, using back-to-back stance-breaks in a single combo will still not mitigate the standardized damage scaling as stressed once more.

Most noticeably, the game does away with the shop feature, and unlockables are now acquired by simply meeting certain criteria in the game's new Mission mode. Mission mode forces the player to fight increasingly stronger opponents under specific circumstances and with different methods of winning in order to complete each mission. Another removed feature is the ability to use the directional pad for movement, with it now only being limited to the left analogue/thumbstick.

This was the last Naruto game for the Gamecube. 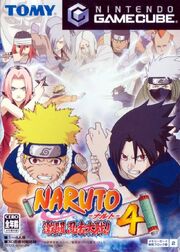