Naruto: Konoha Ninpōchō was the first Naruto game, released on March 27, 2003 in Japan. It was the only Naruto game to appear on the Bandai handheld console - WonderSwan Colour. This Role-Playing Game has little to no chance of localisation to North America, because the WonderSwan Colour was never released outside of Japan.

The game is a RPG where the player selects Seals in a Scroll to use as commands. There is a total of 32 seals (96 counting the three playable character) in the story and 14 exclusive to multiplayer matches, but each character can have only 12 seals on their scroll at a time, having to select which one is to be used in the pause menu when it becomes full. In battles, five of these seals appear randomly, being replaced by other seal from the scroll after usage.

Seals and techniques are divided in four categories: Ninjutsu, Genjutsu, Taijutsu and Others. When defending, a Ninjutsu seal can avoid a Genjutsu technique, Genjutsu avoids Taijutsu, and Taijutsu avoids Ninjutsu. The character's level depends of the level of each of his seals. The more a seal is used, the better the character will be with it, levelling it up. By charging chakra with the 印 or 練 seals or skipping a turn, two or more seals can be combined to form stronger techniques. For example, combining 火 with 強 will result in the Fire Release: Dragon Fire Technique, a stronger fire technique. 火 and 数 results in Fire Release: Phoenix Sage Fire Technique, which hits all opponents. 火, 強, and 数 results in Fire Release: Great Fireball Technique, which is both powerful and hits all opponents. Some combinations are exclusive to specific characters, like Naruto being the only one able to use Sexy Technique with 疲 and 変.

The game follows the Prologue — Land of Waves arc, but with extra missions taken by Team 7. After Kakashi's training, the player must select what missions Team 7 will take. It is possible to fail in some of the missions, including the mission to find Tora.

During the extra missions, Konohamaru will cause trouble and it is believed Naruto is the culprit. After catching Konohamaru, it is discovered that Mizuki escaped and, alongside some Missing-nins, attempt a theft, but are stopped by Teams 7, 8 and 10.

After completing most missions, Teams 7, 8, 10 and Team Guy go to the beach to train their students, having them fight each other. After the last mission, Team 7 is given the mission to escort Tazuna to the Land of Waves. 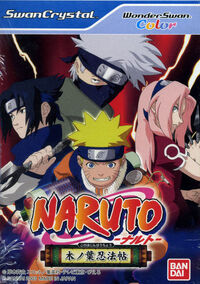