Naruto: Ninja Council, known as Naruto: Saikyō Ninja Daikesshū in the Japanese version, is the first instalment in the Ninja Council series.

There are scrolls that the playable character can obtain to perform abilities at the cost of chakra, which can be used to break down walls or create whirlwinds. The story mode very loosely follows the Prologue — Land of Waves arc to the Chūnin Exams arc. Players also get to have an opportunity to fight Orochimaru. The playable characters are Naruto and Sasuke, with the possibility to unlock Kakashi. 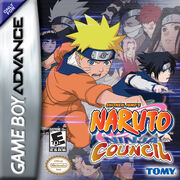