Naruto: Ninja Council 2, known as Naruto: Saikyō Ninja Daikesshu 2 in Japan, is the second instalment in the Ninja Council series.

This game loosely follows the second through third seasons of the anime, but with some minor differences, such as repeated fights against Dosu Kinuta, Zaku Abumi, Kabuto Yakushi, and Orochimaru, as well as areas that did not appear in the anime. It also features a two-player co-op mode using the link cable, and a four-player battle mode. However, it should be noted that while the first game had voice samples from the cast (carried over from Clash of Ninja), this game does not. The sprites in this game, while not only different from Ninja Council, would become mainstays for this series. 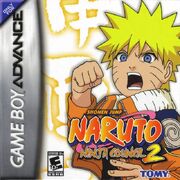