Naruto: Ninja Council 2 European Version, known as Naruto: Saikyō Ninja Daikesshu 3 for DS (ＮＡＲＵＴＯ－ナルト- 最強忍者大結集3 for DS, literally meaning: Naruto: Great Council of the Strongest Ninja 3 for DS) in Japan, is the third instalment in the Ninja Council series and the first for the Nintendo DS.[1]

The game features action/side-scrolling gameplay with touch-screen functionality. There are separate stages in the game much like the first two games in the series. The storyline follows the Sasuke Recovery Mission, minus the Naruto and Sasuke battle. The Sound Four are also present in the game, but Kimimaro is only featured in a mid-mission minigame, instead adding a final battle with Orochimaru. After defeated Orochimaru, Kabuto appears and escapes with Orochimaru, Sasuke then betraying Naruto at the end of the game. 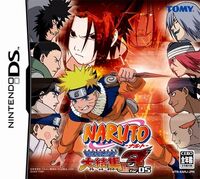