Naruto: Ninja Council 3 is the third instalment in the Ninja Council series for the Nintendo DS. The game is essentially Naruto: Saikyō Ninja Daikesshū 4 DS, though its character-related content such as Kimimaro, the Final Valley stage, Naruto and Sasuke's transformed forms, Gaara, Temari, Kankurō, and Shikamaru's outfits, the Sound Four's special attacks and their alternate forms themselves are changed or removed. The game comes with the Naruto CCG card "Proof of Existence" as an added bonus.

It was released in Europe as Naruto: Ninja Council European Version but with major cuts, several characters removed, some techniques of certain characters removed (most notably Naruto's Rasengan) and a quarter of the missions cut out. However, unlike in the American version, difficulty was not changed (e.g. one mission requiring the player to kill 15 bats in the Japanese and European version was changed to only 10 bats in American one).

Naruto: Ninja Council 3 has similar gameplay to the last two games in the series. The missions take place on a small map. The touch screen serves as both a map and as a place to perform different techniques. Animals and ninja are your typical opponents in the game. On certain missions, you have to fight bosses, which are usually the antagonists from the series. During missions, the player has to defeat the opponent under various conditions (e.g. having your health cut in half, protecting an ally, use a certain move to K.O., etc). 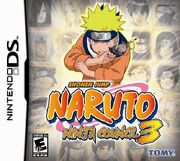