Naruto: Path of the Ninja

Naruto: Path of the Ninja is a video game released in Japan for the Game Boy Advance. For its US release, it was ported to the Nintendo DS.

The sequel to this game is Naruto RPG 2: Chidori vs. Rasengan. That game was never released in the US, with Naruto: Path of the Ninja 2, the third game in the series, being released instead.

It follows the storyline of both the manga and the anime until the end of the Chūnin Exams arc, with Shukaku being the final boss. 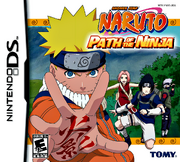