Naruto: Path of the Ninja 2

Naruto: Path of the Ninja 2 is a turn-based role-playing game.

Unlike the past instalments in the Path of the Ninja series, this game's plot is original filler. It is a turn-based strategic role playing game, where the user and the opponent take turns during battle. The story is a filler, but made to last much longer. In the story, the player faces all of the Three Ryūdōin Brothers and needs to obtain 5 mirrors hidden in the game. Nazuna (a girl in the story) says that Genshō Ryūdōin is reanimating the Spirit Beast, and the only way to stop it is by collecting all 5 Hope Mirrors. Once the player collects a mirror, the player has to go through a past event from their memory again (like the three jōnin fought Itachi and Kisame, the player fights them again). But each time, the player near the mirror, Genshō tries to stop the player with through his brothers, Jakō Ryūdōin and Rokkaku Ryūdōin. On the attempt to obtain the last mirror, Gaara kills Rokkaku and after Jakō's last encounter with the player, he loses and Genshō decides that he's useless now and kills him. As Genshō is about to kill the heroes, Naruto Uzumaki taps into the Nine-Tailed Fox Chakra and faces Genshō. Once he is defeated, all the collected mirrors are kept in place to seal the Spirit Beast. But once again for one last time, Genshō merges with the Spirit Beast in an attempt to get rid of the heroes once and for all. After defeating Genshō in his final form, peace is restored around the world (Konohagakure and Sunagakure) and all things come back to normal. In the end, the heroes go back to their respective places (Gaara and co. return to Sunagakure and the Konoha ninja return to Konohagakure), where they are welcomed after clearing their S-ranked mission.

After completing the game, Tsunade adds a new member to the Konoha team, who is an Anbu that mostly represents the player itself.

The following characters appear at some point in the game either as bosses or as enemies in bonus missions but are not playable by the user: 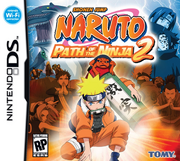