Naruto: The Broken Bond is an adventure game developed by Ubisoft Montreal and published by Ubisoft for the Xbox 360.

The Broken Bond picks up where Naruto: Rise of a Ninja left off, taking place between episodes 81-135 of the anime. It contains the Return of Itachi, Search for Tsunade, Land of Tea, and the Sasuke Retrieval story arcs. There are 30 playable characters, a new tag-team system and original voice acting and music from the original Naruto anime.

The game was first revealed at the E3 2008 Convention, although work on it had started before the release of the first game. According to team member Masao Kobayashi, the developers wanted to bring something new to the franchise but still keeping the same feel of the anime that the first game had. The art direction of the sequel was definitely one of the biggest factors taken into consideration for the development of this new game.[1]

The environments were a big part of the first game and one of the things they wanted to make sure was that the environments in The Broken Bond would support the exploration factor by being very “rich and dense.”[1] The lighting of the game was improved to complement the dynamic story, adding a new casting system, allowing the creation of maps with a more watercolour feel. Unlike the previous game, where the cutscenes were 2D, The Broken Bond now has 3D cinematics. There are also a lot more NPCs. Within the adventure mode, there are now over 70 unique character models.[1]

The developers for The Broken Bond have also decided to keep the multiplayer system like Rise of a Ninja, but have improved upon it in several ways. The online format has been overhauled with a new ranking system, the fighting system has been greatly tweaked, and there are now 30 characters to choose from, 28 different characters and 2 bonus variations of Naruto and Sasuke.[2]

In story mode you can play as ten characters: Naruto, Sakura, Sasuke, Chōji, Rock Lee, Jiraiya, Tsunade, Shikamaru, Kiba, and Neji. The following 30 characters are available for single and multiplayer VS combat:

It has a Metacritic score of 80/100 and has been generally well received by critics. 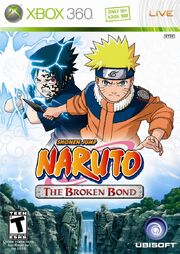