An enhanced re-release was bundled in Naruto Shippūden: Ultimate Ninja Storm Trilogy/Legacy, for PlayStation 4, Xbox One, and Microsoft Windows. The game was once again re-released for the Nintendo Switch on April 26, 2018.

Naruto: Ultimate Ninja Storm retains many of the gameplay elements from earlier instalments of the Ultimate Ninja series. The game features cel-shaded graphics that "will break the barrier between anime and video game". Although there is no online play, downloadable content is available in the form of extra support characters, alternative costumes, and new missions. Unlike previous games, where players fight on a two-dimensional background, Ultimate Ninja Storm allows players to fight in a completely three-dimensional setting. The story mode loosely covers the events of the anime up to episode 135.

The outline of the game's controls are roughly the same as the prior 2D-plane-movement-based titles, only with notable differences:

And in regards to attacks, which no matter where they are performed from, will always lock-back onto their opposition (though they can still be dodged/whiffed):

Characters can now hold the chakra button (Triangle by default) to charge up their chakra just like the prior manual chakra charge, which now also draws in nearby-dropped chakra spheres unlike in the 2D-plane games. A Chakra Load where the user dons a blue flaming aura is performed with a single button tap for a variety of followup input mechanics (and can be performed during any action of the user):

One of the new features introduced to the series in Ultimate Ninja Storm is "Awakening Mode", a transformation mode akin to the prior instalments but is instead activated on its own outside of Secret Techniques. It is done when a player loses a certain amount of health during a match, and starts to charge their chakra for a certain amount of time. The health requirement for each character differs based on how powerful the transformation is. Once activated, the character gains new abilities, speed, and stronger attacks. A few of the characters in the game gain entirely new movesets after transforming like in the 2D-titles, such as Naruto Uzumaki.

Another new powerup mechanic is the Storm Gauge, which is a gauge next to the portrait of the character that is filled up upon hitting the opponent with consecutive-unblocked-combos. Upon being full, attributes are increased for both the on-point character and their supports if they have any, while also refilling their chakra gauge instantly. As a throwback to the Level 1-to-3 Secret Techniques in the 2D-titles, a filled Storm Gauge also can increase the power of a connected Ultimate Jutsu.

Returning to the game from previous instalments is the "jutsu clash" mechanic, which is initiated if both players activate their special attack at the same time. During this mode, both players have to press the corresponding button as fast as possible in order to override their respective opposition's jutsu in the clash.

The game includes 25 playable characters, each of which can also be used as a support character during battle. Ten additional support-only characters were made available as free downloadable content. A new costume for Naruto is unlocked when all support characters are unlocked.

Other intricate mechanics include the ability to:

With these cancel mechanics in mind, at higher level play, the main focus normally comes to cancelling into and making full use of movement options as opposed to attempting an offence whenever possible; with how the Body Replacement carried over from the 2D titles works via low chakra cost, it becomes rather difficult to even fully be able to form more intricate combos let alone commit to a basic string without depleting the foe's escape resources.

Ninja tools thrown with Square in general can be used during short hops (which have a higher emphasis of use compared to the 2D-plane titles) for a form of movement-based zoning for all characters in the neutral (since stationary throws on the ground are considered to be risky and ninja moves have endlag), and as a way to extend blockstrings by cancelling them off of specific string inputs. Characters with more-lockdown-heavy chakra tool throws can make further use of this type of tactic to mixup into either a guard crush or a throw.

Short-hops like with all jumps, actually have 1 frame landing lag, albeit there are situations such as getting hit in midair without a knockdown state occurring, causes forced landing lag frames upon the victim in order to setup mixups and frame traps.

Naruto: Ultimate Ninja Storm recieved generally positive reviews. IGN awarded it a rating of 8.4/10 meaning "great", praising the fluidity of its graphics and describing the visuals as "phenomenal. Gamespot gave it a 7.5/10, meaning "good", praising its boss battles calling them the highlight of Ultimate Mission Mode and criticising it saying that the village sequences are boring and online play is absent. GameStop awarded the game an 8.1/10. 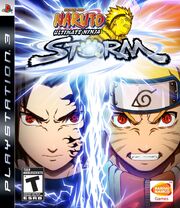