Unlike the Naruto: Ultimate Ninja titles on the PS2, which were fighting games, Naruto: Uzumaki Chronicles is an action/adventure game. This is also the first 3-D Naruto game not to use cel-shaded graphics. A sequel titled Naruto: Uzumaki Chronicles 2 was later released. The game is entirely translated and features no Japanese voice track. It also features 7 playable characters.

Due to the game being released early for English audiences, content present in the game was either modified or removed. The presence of Itachi, Kisame, and Tsunade were completely wiped clean from the original in all FMV sequences and gameplay, while Gaara and Shikamaru had their costumes modified to their present dub costumes. Very strangely, Chōji's abilities to enlarge his arm were kept in the game despite being a spoiler from the Sasuke Recovery Mission. Naruto's Rasengan was also present in the game, but was renamed Power Strike.

Ever since the death of the Third Hokage, the Leaf Village has been experiencing shortage of shinobi to send out on missions. The Genin of the Leaf Village are now required to do missions that are B-rank or higher. This game chronicles the life of Naruto as a ninja going on daily missions such as transporting items to another town, escorting prisoners, collecting dolls, protecting treasure, advertising for a store etc. While Naruto is on his missions, he runs into familiar friends and foes such as Gaara, Kisame, Jiraiya, and Kabuto. Along the way, Naruto learns that Orochimaru has a plan where he will use a deadly green mist that will kill shinobi and resurrect them in order for him to create a massive army of zombie ninja that will help him take over Konoha. 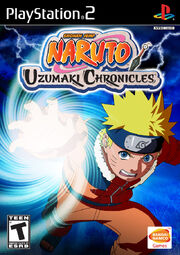