Naruto RPG 2: Chidori vs. Rasengan is the second game of the Naruto RPG series released for the Nintendo DS (the first being released in the US as Naruto: Path of the Ninja). A limited edition version of the game was created as well. This version has Sasuke on the cover, as well as on the manual and the game card.

Its story spans from the Search for Tsunade arc until the end of the Sasuke Recovery Mission. The graphics of the game are significantly improved from the first and every character's sprites have been redesigned. The game adds many characters that can be switched out at various times in the story. The story deals with Sasuke's frustration at Naruto becoming stronger, while Sasuke himself is still too weak to defeat Itachi. This game has not been released outside of Japan, and has been skipped. It was the 105th best-selling game of 2005 in Japan, selling 121, 321 copies. 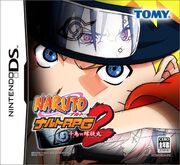