Kakashi and Chōza's team attack the Deva Path. Although their attacks fail and much of the team is defeated, Kakashi is able to confirm that it controls gravity and that it needs to recharge briefly after doing so. To try and catch it during this window, Kakashi sneaks up on the Deva Path. He is repelled, but Chōza and Chōji attack when its vulnerable. Their attack is too late and they are repelled, but in doing so they are able to restrain the Deva Path. Kakashi tries to finish it off but the Asura Path uses itself as a shield. The Deva Path defeats them all and, to make sure Kakashi does not survive his injuries, it fires a nail at his head.

While Tsunade is busy healing all of the Konoha villagers, Danzō keeps his Root personnel from helping in the village's defence, wishing for Tsunade to fail and thus allow him to become Hokage. Meanwhile, Inoichi continues to probe the mind of the Amegakure prisoner, and finds memories of him taking the dead body of a woman to the tallest building in Amegakure. Shizune arrives to pool their findings on Pain, unaware that two Pains have arrived outside. Elsewhere, the Deva Path leaves the site of its battle with Kakashi. Both Kakashi and Chōji have survived, though only the latter can move. Kakashi sends Chōji to Tsunade to tell her of the Deva Path's abilities. The still-active Asura Path tries to stop him. Kakashi uses his Kamui to stop the attack, but he dies in the process.

Kakashi finds his father, Sakumo, waiting for him after death. Sakumo asks him to tell him about his life. Meanwhile, Naruto and Fukasaku try to fuse so that Naruto can use Sage Mode in combat, but the Nine-Tails consistently rejects the fusion. In Konoha, Shizune explains to Inoichi that the Pains' body piercings are black receivers. The new Animal Path attacks their location, which Inoichi recognises as the dead woman he saw in the memories of the Amegakure prisoner. He and Shizune retreat to figure things out, leaving the fight with the Animal Path to others.

Naruto refuses to give up on using Sage Mode, trying to find some alternative to fusing with Fukasaku so that he doesn't let Jiraiya down. Meanwhile, Konohamaru watches the Naraka Path's interrogation of two Konoha ninja about Naruto's location. He tries to leave unnoticed to avoid being captured, but accidentally draws attention to himself. Ebisu steps in in order to buy time for Konohamaru to escape and is quickly defeated. Despite once disapproving of Naruto, he refuses to tell the Naraka Path where Naruto is. Before he is killed, Konohamaru, having not fled, demands the Pain to fight him.

Ebisu pleads for Konohamaru to escape, but Konohamaru refuses, and engages the Naraka Path in combat. As other Konoha ninja engage other Pains across the village, Chōji locates Tsunade. He tells her of the fates of his father and Kakashi, as well as the Deva Path's abilities. She informs him that Chōza is still alive and sends an overjoyed Chōji to him. Soon after he leaves, the Deva Path confronts Tsunade.

The Naraka Path captures Konohamaru. It asks where Naruto is but he refuses to answer, instead taking the Pain's preoccupation with his interrogation to hit him with the Rasengan that Naruto taught him. Meanwhile, Tsunade recognises the Deva Path as Yahiko. It tries to convince her that protecting Naruto is only preventing world peace. She does not tell him where he is, but adds that Naruto doesn't need protection. Elsewhere, Inoichi and Shizune theorise that a master Pain conciseness is controlling the Six Paths of Pain from some remote location. Before they can go looking for whoever this is, Shizune is captured by the Human Path. It reads her mind and learns that Naruto is at Mount Myōboku.

The Human Path kills Shizune and relays Naruto's location to the other Six Paths of Pain. The Animal Path leaves the village while the Deva Path, intending to punish Tsunade for defying a god, leaps into the air. Meanwhile, Naruto learns that Kōsuke had died, meaning something has happened in Konoha, and prepares for battle. The Animal Path summons every Pain but the Deva Path to a safe distance away from Konoha while the Deva Path uses its Shinra Tensei to destroy Konoha. Simultaneously, Shima summons a coalition to the village's centre.

Naruto, in Sage Mode, and an attack force of toads arrive in the middle of Konoha. They do not recognise where they are until they see the Hokage Rock, at which point they realise that Pain has destroyed the village. The survivors begin to regroup and the Six Paths of Pain return to the village to face Naruto. Tsunade, despite having exhausted herself from protecting the villagers from the Deva Path's attack, confronts Pain. The Asura Path, having been restored by the Naraka Path, tries to kill her, but Naruto destroys it. He reminds Pain that he is its target and instructs the rest of Konoha not to get involved in their battle.

Naruto has Gamakichi take Tsunade to safety. The Animal Path summons a variety of animals to attack him, but he parries them all and leaves their defeat to his toad allies. While the summons are eliminated, Naruto defeats the Preta Path. He then prepares to finish the battle.

Naruto forms a Rasenshuriken. Having completed it due to his mastery of Sage Mode, Naruto is able to throw it at the Six Paths of Pain. While most of the Pains escape, the Human Path is destroyed. The Animal Path counters with more summons, which the toads have difficulty dealing with. To prevent the continued appearance of additional opponents, Naruto defeats the Animal Path. Its summons disperse but his Sage Mode disappears. 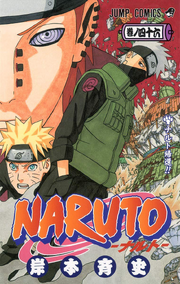