Naruto SD Powerful Shippūden is a side-scrolling action/adventure game in development by Namco Bandai Games and Inti Creates for the Nintendo 3DS platform. The game is based on the Naruto spin-off series, Rock Lee's Springtime of Youth Full Power Ninja Chronicles.

The game features many boss battles to the point where it goes all the way to the Five Kage Summit Arc. The game will also include forehead protector cases that can hold three Nintendo 3DS games. The game allows the player to go into story mode as either Naruto or Lee and go on missions taken directly from their animated story lines. 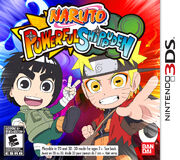