Naruto Shippūden: Clash of Ninja Revolution III is the first Shippūden game released for the Wii in the US or EU and the third game going by the Revolution subtitle.

It is the fifth instalment of the Clash of Ninja series and the overall tenth game using the Gekitō Ninja Taisen fighting engine. The European version is slightly different from the American version in that several glitches have been fixed and the in-battle voices for all characters are Japanese, with several new voice clips recorded and even new voice actors cast for some characters.

The game boasts a robust roster of 40 playable characters. It covers the Kazekage Rescue Mission in the story mode, as with the first Shippūden game in the Gekitō Ninja Taisen! EX series in Japan, and it is also the first game in the series to have Wi-fi connectivity for online battles. It also features what was described as an "overhauled combat system." While many characters have already undergone changes due to the time skip in the story, almost every character has had some major changes since their last appearances in the previous game or Naruto Shippūden: Gekitō Ninja Taisen! EX 3. For example, Kakashi, a mainstay of the series since the first game, has been changed, now sporting a few new moves, combo/string finishers, and several techniques copied from other characters that he can use at any time.

Several characters also receive new alternate special attacks different from Gekitō Ninja Taisen! EX 3 to Clash of Ninja Revolution 3, examples include Naruto, Sakura, Gaara, Kankurō, Itachi and Sasori. The changes also involve removing certain attacks or abilities that proved too much of either a drawback or were overpowering in competitive play, as well as remapping previous attacks. Other inclusions are being able to attack while getting up from a downed position, and universal uses that involve the Body Flicker Technique. Certain characters' strong attacks now use up a small amount of chakra (25%) as opposed to those that drain chakra if they are delayed/extended via holding down the respective button.

The game features a total of 40 different stages to play on, with stage transitions turned off. Stage jumping can now occur both on 1st and 2nd tiered areas back and forth, enabling possible stage jumping in both directions, though this does not work for certain stages however as some of them still work only one-way. There is also a new feature called Latent Ninja Powers, which is the translated Senzai Ninriki feature from 2008's Gekitō Ninja Taisen! EX 3. However, most character's original Senzai Ninriki/Latent Ninja Powers like their specials have been changed from Gekitō Ninja Taisen! EX 3 to Clash of Ninja Revolution 3 most likely for balance. The return of hand seals from both EX 2 and Revolution 2 as well as explosive tags from the latter are also to be noted.

Almost every character also has a brand-new throwing animation in one way or another, done by inputting down + throw. These said throws may or may not reuse one of their other animations or be a new move entirely, along with being inescapable. During the Two-Man Squad mode, it is now possible to set two players to one character each on one squad, rather than one player controlling both characters of a pair. Aside from this, the Two-Man Squad mode also allows a player to call up the character they're not playing as to aid them for a short time with a predetermined combo, or have the other character attack as they enter the field, a feature which was used as standard in Gekitō Ninja Taisen! 4 on the Gamecube.

Many other features that were in Naruto: Clash of Ninja Revolution 2, such as Kumite Mode and Mission Mode make a return. The shop feature from Naruto: Clash of Ninja 2 and Naruto: Gekitō Ninja Taisen! 3 also makes a return for purchasing modes and characters. Instead of being run by Anko as it previously was, is now owned by Bando. With this, some content requires the need to be unlocked first before being available for purchase, and the prices are not as cheap as in the previous games, and money is instantly earned during a character's winning animation.

Other quality of life changes involve:

Many of these changes however, along with the victim's increased chakra gain across the Wii titles (added in with the altered juggling gravity and increased forward knockback mid-juggle), overall causes the game to be more overly defensive than the likes of the competitive scene seen in Gekitou Ninja Taisen! 4 (which was more offensive-heavy).

Most of these changes carry over to Naruto Shippūden: Gekitō Ninja Taisen! Special. 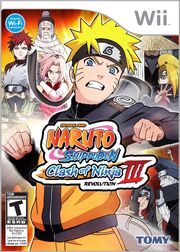