Unlike the Clash of Ninja series, the game is more of a free-roaming hack-and-slash video game. Despite this, it seems to use graphics similar to the aforementioned Clash of Ninja games, and even reuses several models. All characters wear new, armoured outfits that are based on their normal attire, with the exception of Tsunade and Jiraiya.

The story is loosely based on the Itachi Pursuit Mission, and seems to take place shortly after its beginning. Naruto's half of the story is more original to the game, and revolves around a small squad of Konohagakure ninja attempting to stop Kuroma Tatsushiro, one of the last members of the ancient Dragon Gods, from unleashing and taking the power of the Genryū, five eternal dragons originally sealed in Mount Koryū, for revenge. To do so, Naruto must slay each Genryū with the ancient Dragon Blade, given to him by Kuroma's younger sister, Akari.

For Sasuke's half of the story, on the other hand, he has already formed Hebi by the time the story begins, in order to hunt down and kill Itachi. However, his efforts are hindered by Akatsuki's attempts to capture the Genryū that Kuroma has summoned for their own purposes. Throughout the story, the player either plays as Naruto or Sasuke along their journey, utilising their respective blades and team members' abilities to fight through various levels.

Almost all characters have scrolls attached to their new clothing. In terms of gameplay, these scrolls are used to perform jutsu of an elemental nature that is not natural to the user, or to enhance the power of techniques that the user already knows. For instance: Naruto can use Earth Release, Water Release, Fire Release, and Lightning Release, all of which are not of his elemental nature. The armour that the characters don is to protect their chakra system from the environment of Mount Koryū, which normally has the mysterious effect of rendering people unable to use their chakra and fight. 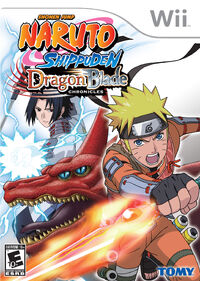