A majority of the gameplay is the same, only that some characters gain new special attacks, with most of them being new down specials.

A hand sign system is also added where players can hold down a dodge button with the throw button together to enter a special stance, the player then has to move the Wii Remote and Nunchuk in unison in three directions in succession to gain special effects. Either they can gain back some chakra, boost their attack power with super armour effects at the cost of chakra or for some can gain access to a special transformation aside from using their down special to transform. However, should one attempt hand signs in the stance will groan or slouch in disappointment if they are too low on chakra or mess up on their hand signs. This stance is also only exclusive to Wii Remote+Nuchuk combo users.

Gameplay improvements from the previous instalment, Naruto Shippūden: Gekitō Ninja Taisen! EX, include obstacles that do damage on contact and the option to turn obstacles off completely. Naruto Uzumaki and Sasuke Uchiha also appear in their original forms as well as their Shippūden forms. 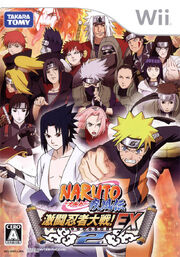