The game includes three game modes that are new to the series. Naruto's transformation now has three tails. Another new feature is the Senzai Ninriki (translated in Clash of Ninja Revolution 3 as Latent Ninja Powers), where every character glows a certain colour when they hit low health/crisis mode. Similar to gaining new specials in crisis mode as of the first Revolution game and beforehand Naruto: Gekitō Ninja Taisen! 3, the Senzai Ninriki is a special crisis mode that provides certain effects depending on the character, for example Naruto and Temari's backward strong attacks no longer use up chakra, Hinata can chakra cancel her attacks with no chakra cost, Kakashi deals damage through guard with all his attacks, Neji and Gaara automatically deflect projectiles while standing still, certain characters' moves become unblockable and so on. Most of the characters' Senzai Ninriki effects change in Naruto Shippūden: Clash of Ninja Revolution 3 onwards.

One of the game's new modes is the "Hurricane Clash Mode", which is also reworked into the new story mode which is original from the main storyline. In this mode, the player controls their character in a full 3D movement perspective and can take on hordes of ninja in a beat em' up genre fashion, with many character movesets retweaked solely for this mode. This style has not appeared in any later Gekitō Ninja Taisen/Clash of Ninja games ever since. 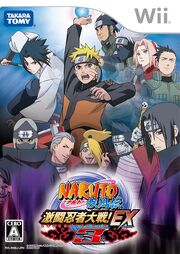