The main story follows Naruto: Shippūden, so the game is essentially an action-based, story-intensive game that blends what previous Ninja Council titles with all new characters and events. Bringing back a more action/adventure feel to the series (rather than turn-based RPG). TOMY is offering up 17 playable characters, a 3-man squad system, touch screen interaction for supers and character call-ins, and wireless multiplayer battling for up to four players. It has also been released in Europe under the title "Naruto Shippūden: Ninja Council 3 European Edition". 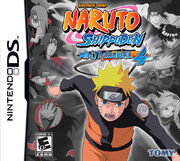