It has all the characters from the first Ninja Destiny game, along with Shippūden characters. A version with all of the Part II elements removed was released in Europe under the title "Naruto: Ninja Destiny 2" with an original story and alternate new characters that wouldn't appear elsewhere until Naruto Shippūden: Ninja Destiny 3. 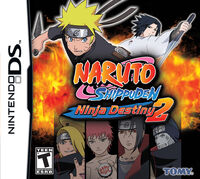