In addition to elements that were established in previous Ultimate Ninja games, Ultimate Ninja 4 offers several new aspects to combat. When two opponents clash, they will begin a series of high-speed attacks, appearing as a pair of blurs flashing across the stage. The winner is determined by a game similar to that of Rock, Paper, Scissors. There is also the addition of "Awakening Jutsu". When certain conditions are met, a character may trigger their Awakening Jutsu. These techniques are more powerful than the standard Ultimate Jutsu and, as the name implies, "awakens" a character's powers (i.e. Naruto's tailed fox form, after which he is surrounded by the fox's red chakra).

The game features a "Master Mode", an RPG-like mode that takes place before the storyline of Naruto: Shippūden. In this mode, players are able to experience the main Shippūden story, but before that they must complete an original storyline called The Black Shadow. The storyline is fairly long, and at the end of it they have to defeat the Black Shadow himself to move onto the main Shippūden storyline. The Shippūden plot line in this game ends halfway through the Kazekage Rescue Mission (approximately up to Episode 15 of the Shippūden anime), after which it moves onto a free mode where the player can complete various missions and tasks, and can also look for tokens called Pieces of Memory, which are needed to unlock Hero Mode fights and cut-scenes.

During Naruto's journey with Jiraiya (somewhere after he developed the Big Ball Rasengan), Naruto proceeded with his training and was given prayer beads which he put around his arms and legs and is put through Jiraiya's Sealing Technique: Four Limbs Weighting Seal, making the beads really heavy, forcing Naruto to carry the beads until they glow red and Jiraiya takes them off, effectively making Naruto exponentially more powerful.

They then make their way to Tree Felling Village, renowned for its mine caves and high-quality crystals. Naruto and Jiraiya then discover several villagers gathered around the cave, including the village mayor. A young woman living nearby appears before them and explains about the ceremony going on. The villagers had gathered for a ritual, that is, a human sacrifice. Jiraiya then explains that it's in fact a ceremony to offer human sacrifices to the demon named Black Shadow living in the cave. The human sacrifice for the ceremony is a little girl called Aoi. Progressing into the cave to stop a determined Aoi, Naruto gets stopped by an unknown creature, claiming to be Black Shadow. The creature blocks Naruto's path with a crystal wall. Naruto tries to break it with his Rasengan, but fails. Meanwhile, the beads start to grow red and Naruto leaves the cave to find Jiraiya to get them off. Investigating further, Jiraiya asks Naruto to find the lady they had met earlier, before he can take off the beads.

Asking around for the whereabouts of the lady, Naruto gathers vital information about the Black Shadow and the Tree of Life that once grew in front of the cave. The Tree of Life, leaves of which were said to cure even the incurable diseases, was cut down by the ancestors of the village, to make transportation of crystals easier. However, they were not aware of the demon that rested within the cave, the Black Shadow. The Black Shadow could not stand the smell of the flowers that grew beside the Tree of Life, and was thus, forced to live in a remote part of the cave. The Tree of Life nurtured the flowers that grew beside it. But, when it was cut down, the flowers withered with it. Free of the fragrance, the Black Shadow appeared before the cave. To avoid destruction, the authorities of the village decided to provide one sacrifice to the demon annually, hence the ritual. Naruto also finds the location of the lady and, in the Forest of Delusion, he find the woman.

Jiraiya appears before both Naruto and the woman, and points out that the woman was Aoi's mother, Tsubaki. It is then revealed that the primary motive of Aoi to head inside the cave, was to bring back the leaves of the Tree of Life, known to cure even the incurable diseases. Tsubaki was indeed suffering from an incurable disease. After the talk with her, Jiraiya takes the beads off Naruto. As Naruto heads back to the cave, Tsubaki's condition worsens. Before he leaves, she gives a pendant to Naruto, asking him to deliver it to give it to Aoi; saying that it will protect her.

Naruto reaches the gates of the cave and remembers an old friend. Reaching the seal, he breaks past the crystal wall. Naruto reaches further inside the cave and finds Aoi heading deeper into the cave. Naruto gives her the pendant and asks her why was she doing it. Aoi then starts crying, refusing to watch her mother die, as she watched his father. Naruto moved by her words, asks Aoi to stay there, while he will take care of the Black Shadow. Naruto leaves and enters the heart of the cave. Three figures, which had previously encountered, fuse together to form the Black Shadow. The final battle between the two begin. But, Naruto soon finds out that the Black Shadow was invulnerable. Naruto gets cornered in a moment.

Black Shadow proceeds to deliver the final blow, when Aoi enters and distracts him. Then Black Shadow looks at the sacrifice, and decides to deal with her first. Naruto somehow blocks Black Shadow's attack and saves Aoi in the nick of time. The pendant Aoi received from Naruto, indirectly from her mother, breaks and some petals fall out. Black Shadow gets uncomfortable from the fragrance of the petals. Naruto then remembers the words from Jiraiya, and the other villagers, Black Shadow can't stand the smell of the flowers that grew near the Tree of Life. He finds his last opportunity to defeat Black Shadow and release his chakra. He manages to defeat Black Shadow, and now exhausted, goes unconscious. He then wakes up in an unknown house. Confused, he leaves the house and sees Jiraiya standing outside, who tells him that he had been sleeping for two weeks. Naruto, remembering about Aoi, quickly leaves for the Forest of Delusion. There he looks at Aoi and her mother, whom he thought was a ghost. After a warm talk, Naruto and Jiraiya leave, while Aoi asks Naruto to come back again, to which Naruto smiles.

The story then continues to Shippūden plot line, from the beginning of Kazekage Rescue Arc up to halfway in the arc. The game ends around episode 15 of the anime, after Naruto defeated 'Itachi'.

Some characters may or may not be available in both pre- and post-timeskip outfits. Parenthesis indicate a character's Awakening Mode(s). 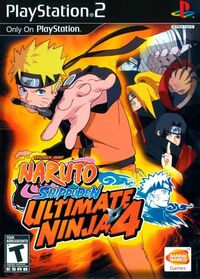