One of the new gameplay additions is the introduction of assist characters. Assist characters are chosen during character selection, and can be called in during a match to deal extra damage. Certain combinations of characters create unique jutsu in a match; these combinations reflect the associations of those characters in the anime and manga. Many of the characters' techniques from the previous game were updated. There are many updated ultimate techniques, including the aforementioned assist-specific ones. Summons have been removed from the game. The assist characters cannot be turned off. The game also includes an RPG mode where players can roam sections of the village and interact with the surroundings of the story and villagers.

The plot is separated into eight acts. There is also an extra act. They are directly related to Kazekage Rescue Mission and the Tenchi Bridge Reconnaissance Mission.

All of Konoha 11, Sasuke Uchiha, and the Three Sand Siblings are available in both pre- and post-timeskip outfits. Parenthesis indicate a character's Awakening Mode(s). 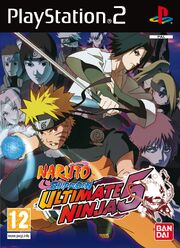