An enhanced re-release was bundled in Naruto Shippūden: Ultimate Ninja Storm Trilogy/Legacy for PlayStation 4, Xbox One, and Microsoft Windows. The game was once again rereleased for the Nintendo Switch in 2018.

The gameplay retains many of the elements from the previous game. The game features 23 stages and 42 playable characters, two of which are secret characters. Some characters can also gain new combos and techniques by activating the Awakening Mode. Lars Alexandersson, a character from Tekken 6 whose third costume was designed by Masashi Kishimoto, is also playable in the game. There are now "single" matches, which lets players play one on one matches in Vs mode, without the use of support characters.

Additionally, choosing certain support characters with a chosen character can strengthen attack and defence, and give the player's team a name. For example, choosing any combination between Naruto, Sasuke, Sakura and Kakashi will be called 'Team 7'. An exclusive "Shuriken Clash" is available in the "Sasuke vs. Itachi" boss battle, where the tool throw button must be pressed repeatedly to give or receive damage.

Free roaming also makes a return. The game features a 1:1 recreation of Konohagakure. In addition to the village, players are able to roam outside the village, ranging from forests to deserts, and Amegakure to Sunagakure. Instead of being sandbox-style free roaming, the game is more RPG-like when it comes to exploration. Boss battles return, with quick-time events and cutscenes. Boss battles are divided into 2 or more parts, depending on the boss fight. For example, the Naruto vs. Kakashi boss fight (which is held at the Training Field) contains 2 parts: one of them is normal fighting; in the other part, after Sakura smashes her fist into the ground, the scene is changed into a new stage with water and rocks; in this part of the battle, Kakashi attacks with long-range techniques that the player must avoid.

In the quick-time event portions of boss battles, pressing the buttons quickly enough earns "Stars". Earning 80% of the stars by the end a battle activates "Secret Factors" which drive away from the main story to show what a character is thinking or flashbacks to Part I of the series; the Secret Factors further flesh out the story that is occurring at the current time.

Other notable mechanical changes include:

Naruto Shippūden: Ultimate Ninja Storm 2 was officially announced on December 21, 2009 by Namco Bandai Games at a Jump Festa event. V Jump magazine revealed the game a few days beforehand. As CyberConnect2's first multi-platform project, they worked closely with Microsoft. On July 16, the demo release date was announced in the official website. It was officially released July 29, 2010 on the Japanese PlayStation Network and Xbox Live (The Latter requires a gold membership). The European release date for the demo is August 25 2010. It contains the Naruto vs. Kakashi boss battle. Its North American release date is October 19, and its European release date is October 15. On September, 27th it was announced that Naruto Shippūden: Ultimate Ninja Storm 2 is past the development stage and is in publishing as of the finished date.

The story of Naruto Shippūden: Ultimate Ninja Storm 2 begins from the very first Naruto: Shippūden episode (even containing the preview of the future Naruto vs. Sasuke clash, although the preview is of Pain destroying Konohagakure) to the end of Pain's Assault, a content of 3 years of anime broadcasting. The game features a deep three-part story from the point of view of Naruto Uzumaki, Sasuke Uchiha and Jiraiya.

In Free Roam mode you can go through the Konohagakure, forests, deserts, and Sunagakure. The game lets you play through the "Rescue Gaara Arc" as Naruto, "The Hunt for Itachi Arc" (as Sasuke Uchiha), "The Amegakure Infiltration Arc" (as Jiraiya) and "The Pain Invasion Arc" (as Naruto). In addition, there are certain times where you can control others in the overworld, such as Shikamaru and Asuma. The story mode is no longer played by doing missions, but is now an RPG with no connection to unrelated story parts. You'll be able, as always, to play side-story missions, from the easiest to the harder ones. You'll collect cursed dolls, memories, messenger birds, and items (battle items, collection items). You will also, at some points of the story, be accompanied by team-mates and friends. Scroll collection is here to stay; you will collect different types of scrolls: blue, yellow, green, and red scrolls. Each scroll will have to do with the things you did before collecting them. If you had fought a major battle before, and you go to the same spot, you will find Red Scrolls signifying Major Battles or Blue Scrolls which signify an Important Memory. There are also Memory Crystals that you can use in The Hokage's Mansion, to see memories of before the time skip.

The missions include Correspondence Events, Friendship Events, Tests, and battles. You'll earn money and items that will be needed to unlock and complete other challenges when you successfully complete the mission. The stores that are spread in the World will have different types of products eg. ninja info cards, figures, music, dioramas, movies, additional Ulimate Jutsu, and special items that help you continue the story. You will find missions by talking with people in bars, talking with Tsunade, with your friends and by people in the street.

The trophy system is very linked with the storyline and the Free Roam Mode, such as getting a gold result (S-rank) when you win a boss battle, getting a lot of money and collecting special items that are important for missions.

Thanks to a new technology developed by Studio Hero outside Japan, the scenery in the Free Roam is the same as the anime, it's basically putting the computerised character in the landscape. It will incorporate all the known Konoha spots such as Yamanaka's Flower Shop, the Hokage office (the room and the rooftop) Ramen Ichiraku and some bars, such as the dumpling bar and some leisure bars.

These areas are only accessible during a battle and cannot be accessed outside of battles.

Ultimate Ninja Storm 2 has had generally positive reviews. On the review aggregator Game Rankings, the Xbox 360-version of the game has an average score of 76%, based on 25 reviews. On Metacritic, the Xbox 360-version has an average of 74 out of 100 based on 31 reviews. It was slightly better-received on the PlayStation 3, with Game Rankings and Metacritic giving it a 77% and a 75 out of 100, respectively. 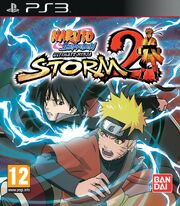