View source
watch 00:51
What is Naruto Shippden: Ultimate Ninja Storm 3?
Do you like this video?
Play Sound

Naruto Shippūden: Ultimate Ninja Storm 3 is a game developed by CyberConnect2 and published by Namco-Bandai games for the Xbox 360 and PlayStation 3. It was released on March 8th 2013 in Europe, March 5th in North America, and was released on April 18th in Japan. An enhanced edition called "Full Burst" was released on October 24th 2013 for PC and Steam. The game starts with a flashback from the beginning of the Nine-Tailed Demon Fox's Attack and then starts with the Five Kage Summit arc, ending with an alternate turn of events in the Fourth Shinobi World War. In Europe, the game is available in a "Will of Fire Edition" and "True Despair Edition".

An enhanced re-release was bundled in Naruto Shippūden: Ultimate Ninja Storm Trilogy/Legacy for PlayStation 4, Xbox One, and Microsoft Windows. The game was once again re-released for the Nintendo Switch on April 26, 2018.

Namco Bandai stated that the game would feature a 'more profound' story and a combat system that is 'aimed to further evolution'. Other than the usual form of Awakening, renamed Adversity Awakening, the game introduces a new element called Instant Awakening where players can go into awakening mode at any point during the battle, even in the middle of a combo. The downside of being in an Instant Awakened state is that it depletes a player's max chakra amount. If a player depletes their chakra capacity completely while in an Instant Awakening, they will have to wait for a period before being able to charge their chakra (though in Guy and Lee's case, they have self-inflicted HP drain instead for their Instant Awakenings).

Characters who are awakened can now be grabbed or hit by a U2/Ultimate Jutsu, whereas trying to do so in the prior games forces a clashing recoil for both characters akin to an actual clash.

Boss battles also make their return to the game. The game also has the return of missions in Konoha during story mode. The story mode also features mob battles, similar to Naruto Shippūden: Ultimate Ninja Impact. There is a new system known as "The Ultimate Decision", where players are able to follow two different paths in the game which are the Legend and Hero paths. Legend path is mostly difficult in battles while Hero path is the opposite. Choosing a path gives a player good amount of points on the chosen path if the battle is completed.

However, a majority of intricate mechanics that used to be in the games before this one have been somewhat nerfed and/or awkwardly balanced:

In August 2012, CyberConnect2 started a new suggestion form in their official website, requesting players from all over the world their opinions regarding what they would like to see in Ultimate Ninja Storm 3 and upcoming Naruto games they would release. In July 2012, Comic-Con International, Namco Bandai Games America representatives confirmed plans for a Spring 2013 release in North America.

In October 28, London MCM Expo, CyberConnect2 CEO Hiroshi Matsuyama announced a card edition, a poster, a Naruto DLC Goku costume, the original Naruto Storm 3 soundtrack, the Naruto Storm 3 game, a figurine by Banpresto, and a Naruto edition and a Sasuke edition. They also stated that those who pre-order will get five free downloadable costumes, including Armoured Naruto. This game is rated T for Teen. There is a "violent imagery" filter that can be turned on or off, for people under 13.

In January 4, 2013, Hiroshi Matsuyama announced that there will be over 80 playable characters.

In July 4, 2013, Naruto Shippūden: Ultimate Ninja Storm 3 Full Burst was announced by Namco Bandai Games Europe, containing material of the original with enhanced cinematics, all released DLC including the new "Final Episode of the Uchiha Brothers" DLC, which expands the game's story and adds Kabuto Yakushi's Sage Mode form to the character roster and 100 additional missions in the story. Owners of the console game will be able to download the new content as a DLC pack.

As the war was still on-going at the time, a non-canon ending to the story was made.

Defeated, Tobi, Madara and Kabuto fall back, thus giving victory to the Allied Shinobi Forces. The Five Great Shinobi Countries shinobi return to their villages while Kage discuss on preparing for a counter-attack against Madara's group along with bettering the peace between them and their countries. Naruto is congratulated for his victory upon awakening from his battle with Tobi in Konoha and is spurred by the spirits of his parents to join his friends.

Sasuke, however, leaves the Mountain's Graveyard to find Naruto.

In certain boss battles, there are support characters with special skills that assist the player in their battle:

In North America, the codes for this pack are given to those who are subscribing to Weekly Shonen Jump or Neon Alley. In Europe, those who pre-order the game receive all the costumes.

This pack can be purchased for $1.99 at the PlayStation Store and 160 Microsoft Points at the Xbox Marketplace.

This pack can be purchased for $0.99 at the PlayStation Store and 80 Microsoft Points at the Xbox Marketplace.

This pack can be purchased for $2.99 at the PlayStation Store and 240 Microsoft Points at the Xbox Marketplace.

This pack can be purchased for $0.99 at the PlayStation Store and 80 Microsoft Points at the Xbox Marketplace.

This pack can be purchased for $1.99 on the PlayStation Store and 160 Microsoft Points at the Xbox Marketplace.

This costume can be purchased for $2.99 on the PlayStation Store and 240 Microsoft Points at the Xbox Marketplace.

This pack can be purchased for $0.99 on the PlayStation Store and 80 Microsoft Points at the Xbox Marketplace.

Most of the costumes that were released in bundles in North America and Europe are also available individually in Japan.

The Full Burst content can also be downloaded on regular Storm 3 copies. The content contains all previous DLC, HD cinematics, 100 additional missions and the addition of Kabuto in Sage Mode to the character roster. The DLC was released with the physical game on October 22, 2013 in North America and Europe.

Aside from bosses in story mode, there are other enemies that can only be fought exclusively in the story. 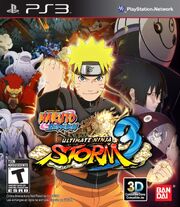