Naruto Shippūden: Ultimate Ninja Storm 4 is the sixth and final instalment of the Ultimate Ninja Storm series developed by CyberConnect2 and published by Namco-Bandai games for the PlayStation 4, Xbox One, and Steam. It was released in February on the 4th in Japan, 5th in Europe and the 9th in North America. An enhanced edition called "Road to Boruto" was released in February 3, 2017 for PlayStation 4, Xbox One and Steam. A Nintendo Switch port was released on April 24, 2020.

Returning to this game from previous instalments is the "Wall Running" feature where two shinobi are able to fight while climbing the walls of the selected stage. Unlike previous instalments however, where if one player ran up the wall the other player was forced to fight on the wall as well, in this game it is implied that if one character runs up the wall the other character can still fight on the ground.

A new feature was introduced in the game called "Leader Swap", where you can switch out the main on-point character you're fighting as to fight against your opponent with your support characters, which can be cancelled into and out of a large majority of various actions. To add balance, the character switched in will share the same life bar as the main character, as well as still maintaining an Awakening state. As a result of the new feature, support only characters from previous entries in the series have been omitted, albeit Leader Swaps can easily disengage attacks landed on the user which can invalidate offence further if used correctly (essentially allowing skilled users to maintain both offence and defence simultaneously). A new version of Naruto and Sasuke will share a unique Combination Awakening when played together.

The option to select one of the three fighting types from Storm Revolution (Ultimate, Awakening, and Drive) is removed. Just like its other predecessors, the player can use all three types at once during a single and/or team battle.[1] Before starting a battle, you are able to choose between multiple jutsus and Ultimate Jutsus to use in battle, a feature that has been in previous entries of the Ultimate Ninja series, but now makes its return.

The game is more realistic than its predecessors where an outfit can be damaged if it is hit and even worn off. Jutsu will have long-term effects on the outfits. For example, if a fireball hits the character, it will remain ignited for a while, but water can reverse that effect. Stage destruction will take place as well in boss battles and free battle, and there will be more details showing particles as they get worn off from an attack.[2]

This is the list of the boss battles featured in this game:

Bandai Namco Entertainment Europe has announced three DLC packs - and an exclusive Combination Ultimate Jutsu for those who buy the Season Pass or buy all three packs - including:

Road to Boruto will have a new adventure mode scenario with Boruto as the controllable character along with a Sasuke Uchiha vs Kinshiki Ōtsutsuki boss battle, and several new characters including Mitsuki, and new versions of Boruto, Naruto, Sarada, and Sasuke. Road to Boruto will also allow players to use the Pre-Order Exclusive versions of Boruto and Sarada, Mecha-Naruto from the previous game, and give new playable costumes, such as Kakashi's Pre-Order Exclusive Hokage Outfit, all Region-Specific DLC, and a brand new costume for Sasuke's Part 1 Blue Outfit where he wears his arm sleeves and shuriken holster. Similar to Storm 3's Full Burst, it will exist as a standalone version with the full game and a separate DLC. 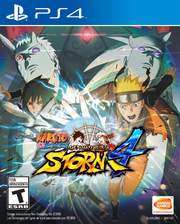