Naruto Shippūden the Movie (劇場版 NARUTO -ナルト- 疾風伝, Gekijōban Naruto Shippūden) is a 2007 film directed by Hajime Kamegaki and written by Junki Takegami. It is the fourth movie in the Naruto movie series. It debuted in Japanese theatres on August 4, 2007. The US DVD release was officially released on November 10, 2009. Before its release, it was announced that the dubbed DVD can be pre-ordered along with the limited edition of Naruto Shippūden: Clash of Ninja Revolution 3. Disney XD aired the English dub of the movie on Sunday, May 15, 2011. The ending theme song to the movie is Lie-Lie-Lie by DJ OZMA.

The opening scene of the movie showed Naruto fighting a monster, only to be killed by it. The setting then went back to a few days previous, where a man named Yomi attacked a shrine, to retrieve the spirit of Mōryō, a demon who attempted to destroy the world and create his "Thousand Year Kingdom". Since he was lacking a body, Yomi offered his as a temporary substitute, until they could retrieve Mōryō's original one sealed in a different shrine.

The only threat to Mōryō's plan was a priestess known as Shion, who could seal his spirit away once more. He raised a stone army from their slumber, to attack the rest of the world, while his four subordinates went to murder Shion. They were given special chakra creatures to enhance their strength.

To deal with the threat, Konohagakure sent out many advance teams to stall the stone army. Naruto Uzumaki, Sakura Haruno, Neji Hyūga and Rock Lee were sent to guard Shion, and deliver her to the shrine where Mōryō's body was sealed. They fended off her four would-be assassins, who exhausted themselves in a failed attempt to kill Naruto. Shion told Naruto of his upcoming death; while initially sceptical, her assistant, Taruho, explained that Shion could see the future, and all the events happening in her visions are 100% true. As they headed for the shrine, the group was ambushed once again by Yomi's four subordinates, and split into two teams. Lee killed his opponent by eating an alcoholic candy to get him into Drunken Fist, while Naruto was kept busy by his. Neji told Sakura to escape with Shion, unaware that his two opponents were actually just one man and a puppet, to distract him and let the remaining ninja catch up to Sakura and Shion, Sakura was then shot with a anaesthetic jutsu by the remaining ninja, and Shion was killed.

This turned out to be a ruse: the dead "Shion" was actually Taruho, who transformed himself into a copy of Shion to trick them into thinking they had killed the real one. Shion explained that her power worked by allowing her spirit to jump back in time at the moment of her death, thereby allowing her to avoid it by having someone die in her place. Naruto insisted that he would not die, and likewise would keep Shion safe.

Thanks to Lee, Neji realised that the remaining three ninja must keep replenishing their chakra to battle effectively. Naruto was sent on ahead with Shion, while Sakura and Lee tricked their opponents into wasting their chakra on futile attacks. When they ran out of chakra and they had to replenish it, Neji disabled the final ninja, who was providing the chakra, leaving the other two powerless against Lee and Sakura.

At the mountain temple where Mōryō's body was kept, Naruto and Shion found the stone army waiting. On the first attempt to get pass the army, both Naruto and Shion fell off a cliff. Afterwards, Naruto came up with a plan and promised Shion that he would protect her. Naruto then held the army back using shadow clones while Shion headed inside the temple to begin the sealing ritual. Yomi was already inside. He had terracotta soldiers attack her, before her light slashed and killed them. Yomi tricked Shion into beginning the technique with him inside the barrier, allowing Mōryō's spirit to reunite with his body. Eventually Kakashi, Temari, and others came to the fight and destroyed the remaining army. After Naruto came to rescue her, she broke into tears saying that all the people who sacrificed their lives were a waste. Mōryō then burst free from Yomi's body to the air and Naruto started fighting him. Yomi died and his body fell into the lava. Swallowing down Mōryō's words about her mother's actions and Shion's powers not letting him fuse into her, and about to see her prediction of his death come true, she used her power to shield Naruto from being stabbed, changing Naruto's fate. Intending to kill herself and Mōryō in order to protect him, Naruto stopped her seconds before her death, reminding her that he promised to protect her. After he inspired her to live, they let their chakra and emotions go, and used Naruto and Shion's Super Chakra Rasengan to finally destroy Mōryō, creating a volcano where the shrine used to be in the process.

With Mōryō gone, Naruto asked Shion what she intended to do now. She replied that because Mōryō was a demon caused by the evil thoughts of men, it was possible there could be another Mōryō someday. Because of this, she would pass her power to other living priestesses that would suppress demons like Mōryō. Indirectly asking Naruto to father her child, she asked if Naruto would help her, much to everyone's shock. Misunderstanding what she said, Naruto happily agreed.

In its opening weekend, Naruto Shippūden the Movie came in at number six.[1] In its second week the movie dropped to number eight and stayed there in its third week.[2][3]

As with many movies in the series, Naruto Shippūden the Movie is also available in several print versions: 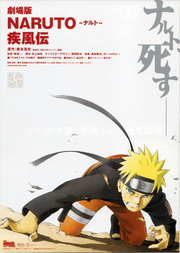