Naruto Shippūden the Movie: Bonds (劇場版 NARUTO -ナルト- 疾風伝 絆, Gekijōban Naruto Shippūden: Kizuna)[1] is the fifth overall Naruto film, and is the second Naruto: Shippūden film. It was released on August 2, 2008. The movie was announced in Weekly Shōnen Jump along with the DVD release date for the first Shippūden movie. Additionally, the teaser trailer for the second movie was aired with Naruto: Shippūden episodes 40-41, and again with episodes 66-67. In episodes 70-73 the opening sequence was replaced with footage from the movie. The theme song for the movie is "NO RAIN NO RAINBOW" by Home Made Kazoku. The English dub version was released on DVD and Blu-Ray on October 25, 2011.[2]

A mysterious group of ninja from the Land of the Sky made a surprise attack on Konoha. This was because Konoha had nearly destroyed the Land of the Sky during the Second Shinobi World War. The group began attacking Konoha, causing mass mayhem, with Sora-nin flying using a Winged Mechanical Device and bombarding the village. A boy had come a very long way to inform Konoha that his village had been attacked, and that he was looking for his sensei, who was currently in Konoha, so that he could go back with him to heal the injured at his village.

A three-man team, consisting of Naruto, Sakura and Hinata, were sent to accompany the boy, Amaru, and Shinnō, his sensei, to help Amaru's village. The team travelled through a forest full of eerie beasts and poisonous animals via small rowing boats down a river. A Sora-nin scout suddenly appeared in the sky. Sakura, Hinata and Shinnō hid by the riverside with Naruto and Amaru hiding underwater until the Sora-nin had passed. While underwater, Amaru dropped his scalpel, a present from his beloved sensei, and swam down to get it. As he tried to resurface, he became caught in the reeds. After freeing Amaru from the reeds and helping him back into the boat, Naruto noticed that Amaru was, in fact, a "she", due to her breasts and corset. Naruto blushed, before a poisonous piranha-like fish bit him and he fainted. Later on, Naruto woke up still blushing, partly because Amaru was sucking the poisonous blood out of the wound on his thigh, thus saving Naruto. Naruto asked her if she was a "she", and suggested that Amaru had feelings for her sensei, which he was slapped for.

Meanwhile, at Konoha, the Sora-nin retreated because they were out of chakra to continue flying, so Konoha sent another special team to search for their base. Sai approached the ships they were using as a base near a beach on one of his ink birds to attract their attention and to gauge their abilities, while Shikamaru and Kakashi hid behind some rocks near the shore, waiting for the fourth man of their team, Shino, to infiltrate and damage their base.

At Orochimaru's lair, Orochimaru had become even more ill because the body transfer technique he used was close to its expiration. Kabuto was attending to him, and told Sasuke that the Sora-nin were attacking Konoha, to which Sasuke replied that he didn't care. Orochimaru ordered Sasuke to capture and bring back to him a man who would be able to help him perfect his reincarnation technique.

Naruto and company finally reached Amaru's village, and found that the village had been badly attacked, with some parts now in ruins and with the inhabitants nowhere to be seen. Amaru ran around trying to find some villagers before she unknowingly triggered a trap which sent a volley of kunai flying towards her. Her sensei, Shinnō, rushed to block the kunai to protect her, but was hit in the process. Naruto, Sakura and Hinata hurried to the scene but it was too late, and Shinnō died of his fatal injuries. After Amaru came to her senses, they continued to look for villagers, with Sasuke now on his way to the village.

Later on, Naruto, Sakura, and Hinata decided to search for the villagers without Amaru. Eventually, Sakura met up with Naruto, who was looking at ruins in the distance. They went together to explore them, and found themselves in front of a evil monster calling itself the "Zero-Tails", which identified itself as a version of a tailed beasts that fed on the darkness of human souls, and had somehow taken over Amaru. Sakura proved to be no match for the beast, and fell unconscious. The creature sensed that Naruto had a huge dark power inside of him, so it taunted Naruto and coaxed him to use that power by saying that he cannot save anyone without it. This made Naruto remember his failure in saving Sasuke, and became emotionally unstable, which caused him to enter his initial jinchūriki form, his three-tailed state, and finally his four-tailed state. After fighting with the monster for a while, a seal on Naruto given by Jiraiya came off and reminded him of how the tailed beast chakra hurt his friends, causing him to immediately turn back to normal.

Naruto pleaded with Amaru to ignore the darkness in her heart, which finally resulted in the beast being defeated. Sakura woke up in Naruto's arms, and slapped him to fill the awkward moment. They decided to split up, with Naruto continuing to search for the villagers and Hinata and Sakura returning to Konoha to get help. Amaru, who was supposed to go with Sakura, stayed behind to help Naruto. They then found some old ruins that Shinnō had mentioned earlier, and entered them. Shinnō was inside unharmed, and spoke of conquering the world with the power of darkness. Amaru, excited that her sensei was still alive, ran to hug him. Naruto noticed that something wasn't right, and Shinnō laughed mockingly at Amaru for trusting him. Shinnō explained how he had been researching the power of darkness for about 15 years, and that he had finally found it in Konoha. He claimed that all he needed now was a secret scroll with the reincarnation technique written on it. He then transformed into a muscular, youthful form, and Naruto charged towards him, only to be outmatched again and again, with Naruto becoming more and more injured.

Shinnō, in his Body Revival form, tried to convince Naruto to use the Nine-Tails' chakra, with Amaru distraught and in tears whilst Shinnō and Naruto battled. Ever since she was small she had had a strange illness, and no-one had liked her, fearing that they would be infected. Only Shinnō had dared to care for her, and had managed to cure her. Naruto told her not to throw her feelings away, while the evil Shinnō jeered at her. She finally admitted her love and feelings to her sensei, to which Shinnō merely laughed. Naruto attacked him and managed to land a hit, although it didn't seem to affect Shinnō. Sasuke appeared suddenly, striking Shinnō with Chidori Senbon, which attacked his cells and forced him to revert back to his normal form. He then explained that Orochimaru needed help with a reincarnation technique to Shinnō, who then gave Sasuke a scroll, saying that it would be enough help. Shinnō then fled the scene, with Sasuke pursuing him. Naruto told Amaru to go find the villagers while he went after Sasuke. He found Sasuke in a room, and asked him what he was doing there, which Sasuke ignored. In the same room was a cocoon, absorbing dark chakra. Shinnō had fused with the cocoon, and attacked Naruto and Sasuke. All of their counterattacks proved useless, as any chakra they used was absorbed by the cocoon and rendered harmless. Using tentacles as his arms, Shinnō grabbed hold of both of them and began draining their chakra. Sasuke activated the first level of his cursed seal, releasing its evil chakra, and Naruto, who had understood Sasuke's plan, turned into his initial jinchūriki form and sent a large amount of chakra into the Zero-Tails, and managed to break free with his shadow clones before using Tornado Rasengan. After escaping himself, Sasuke ascended to the second level of the cursed seal, before using Chidori Katana to cut off the beast's power. The creature began rampaging after regaining control of itself, having now completely absorbed Shinnō.

Amaru found Hinata and the villagers in a cell, and managed to free them all before finding them a flying lifeboat for them to escape in. Naruto rushed out of the ruins, and ordered Amaru to go. She refused, but Sasuke then threw her into the boat by force. Naruto also forced Sasuke onto the lifeboat using a Rasengan, mouthing a few words to Sasuke as he fell before flying away using the wings from his cursed seal form. Remembering how Jiraiya had once said that Naruto had the willpower to never give up, he created a large amount of Shadow Clones and began destroying the ruins using the Guts Rasengan. Soon, the whole ruin had been destroyed with a Rasengan, leaving Naruto to fall down to the sea. Amaru saw Naruto from the boat, and, grabbing a pair of Sora-nin wings, flew to catch him. Upon reaching him, she removed the wings to grab him, and they fell together. Jiraiya suddenly appeared with Gamabunta, and caught the two, saving them.

Later on, Naruto woke up in Amaru's arms. Sasuke returned to Orochimaru and gave him the scroll, who then asked if something good had happened. Sasuke ignored the question, going off to train while remembering Naruto's parting whisper of, "I'll definitely bring you back to Konoha".

As with many movies in the series, Naruto Shippūden the Movie: Bonds is also available in several print versions: 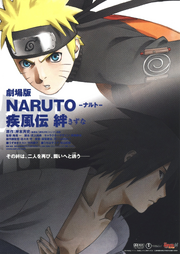