Once upon a time, the Nine-Tailed Demon Fox devastated the shinobi village of Konohagakure, and was only stopped when the village's leader, the Fourth Hokage, gave up his life to seal it within the body of an infant. Twelve years later, a young orphan boy named Naruto Uzumaki regularly pulls pranks and is constantly causing trouble around the village. The villagers dislike him for it, but having no parents or friends, Naruto craves even negative attention.

One day, Naruto paints all over the Hokage Monument, leading to the current village leader, the Third Hokage, to come and see. Naruto is eventually brought back to class at the Academy by his teacher, Iruka Umino. At class, Iruka has each student perform the Transformation Technique in preparation for the class's final exam tomorrow, but Naruto instead uses the Sexy Technique.

After class, Iruka has Naruto clean up his earlier mess, before deciding to treat Naruto to ramen later that night. There, Iruka asks why Naruto would perform the prank, and Naruto announces his own plans to become Hokage, even though he is incapable of performing even the most basic of techniques. At the final exam, Naruto is unable to use the Clone Technique and Iruka subsequently fails him. Afterwards, a more sympathetic instructor, Mizuki, tells him an apparent secret, while the Third Hokage talks to Iruka about how Iruka also lost his parents in the Nine-Tails attack, and that he relates to Naruto that way.

That night, Naruto manages to steal the Scroll of Seals, believing that if he can learn one of its secret techniques, he will finally be allowed to continue on to the ranks of the ninja. After successfully stealing the scroll, a search is placed on Naruto, and he is caught by Iruka after only learning one technique. Realising that Naruto has been tricked, Iruka protects him from Mizuki's attack, Mizuki planning to take the scroll for himself.

To sway Naruto to his side, Mizuki tells Naruto the truth: Naruto is the boy that had the Nine-Tails sealed inside of him, and that a decree was placed preventing anyone from talking about it, barring Naruto from learning about it. He goes on to explain that the villagers hate him for the monster he contains and that Iruka, his parents having been killed by the Nine-Tails, must hate him the most. Mizuki attempts to kill Naruto, but Iruka blocks the attack, revealing his own past to Naruto. Overwhelmed, Naruto flees into the woods.

Iruka and Mizuki confront each other while Naruto listens behind a tree. Mizuki berates Iruka, claiming Naruto will use the scroll to get revenge. Iruka says this is not the case as he does not blame Naruto for the beast's actions, before acknowledging him as his friend. Having finally made a friend, Naruto reveals himself and uses his newly mastered Multiple Shadow Clone Technique to defeat Mizuki, while the Third Hokage calls off the search. Amazed by the complicated technique Naruto has learned, Iruka officially makes Naruto a ninja in training and puts faith in him becoming Hokage.

While preparing for his life as a ninja, Naruto Uzumaki meets the young Konohamaru in the middle of an attempt on the Third Hokage's life. When he fails, Konohamaru asks to train under Naruto, hoping that his Sexy Technique will be enough to defeat the Third and become Hokage. Planning to become Hokage himself, Naruto asks why he would want the title. Konohamaru explains that, as the Third's grandson, people only identify him as such and not by his name. He hopes that, by becoming Hokage, people will acknowledge him, not because he's the grandson of the latter.

Knowing what Konohamaru is going through, Naruto agrees to train him. Ebisu, Konohamaru's tutor, believes the "Nine-Tails boy" is a bad influence and attempts to stop their training. Konohamaru uses his perfected Sexy Technique to try and get rid of Ebisu, but it has no effect. Naruto follows up with his Harem Technique, which affected Ebisu and a proof he's also a pervert. Seeing that he still has much to learn, Konohamaru breaks off his student-teacher relationship with Naruto, as depending on Naruto's help to become Hokage would mean he is unfit for the position.

Naruto Uzumaki, having finally passed his graduation exam, heads to the ninja academy to be put into three man squads. He ends up paired with Sakura Haruno, a girl Naruto has a crush on, and Sasuke Uchiha, the person Naruto considers to be his rival. After Sakura shows disappointment at being paired with Naruto, and only happy about being paired with Sasuke, Naruto devises a plan. During lunch Naruto ambushes Sasuke and ties him up, then uses the Transformation Technique to turn into Sasuke. Approaching Sakura as Sasuke, Naruto goes about finding what she thinks of him. Interrupted by having to go to the bathroom (right before he can get a kiss from Sakura), Sasuke manages to get free. Sasuke passes Sakura and she pesters him about their time together a few moments earlier. She then goes about insulting Naruto, and makes fun of him having no parents. Sasuke retorts angrily, saying she makes him sick. Deciding she has been too mean to Naruto, she decides she should try and be nicer to him from now on.

The newly-formed Team 7 is given the jōnin instructor, Kakashi Hatake. To help them get to know each other, they all share something about themselves; Naruto wants to be Hokage; Sasuke wants to kill a certain someone; Sakura blushes before revealing that she likes Sasuke, but openly states she hates Naruto; Kakashi, despite it being his idea, refuses to tell them anything about himself, instead suggesting that they are all hopeless.

Before they can officially be made genin and thus ninja, Team 7 must take part in a survival test. Kakashi advises they do not eat beforehand and gives them until the next day to prepare. He then shows up late. Team 7 is tasked with getting one of the two bells he keeps on his person. Whichever two members get a bell will get lunch and be made into a genin while the third is sent back to the Academy with an empty stomach. Determined to take a bell for himself, Naruto attacks Kakashi. He is easily stopped, by Kakashi. Kakashi suggests that they may have potential after all.

Sasuke and Sakura go into hiding, planning to ambush Kakashi when an opportunity presents itself. Naruto takes a direct approach and confronts Kakashi, planning to immediately take one of his two bells so that he can have something to eat. Kakashi repels Naruto's attacks with little effort, all without interrupting his reading of an Icha Icha book. Kakashi warns Naruto to avoid showing his blind spot to an enemy and attacks with One Thousand Years of Death that sends Naruto crashing into a nearby lake. Frustrated by the ease with which he is being defeated, Naruto creates a number of shadow clones to overpower Kakashi. The clones capture and attack Kakashi, only to discover that Kakashi is another of Naruto's shadow clones.

Naruto gets into a fight with his shadow clones, believing that one of them is Kakashi in disguise. This is not the case, to his disappointment, Kakashi having merely switched places with one of the clones. Naruto is quickly cheered up when he sees a bell lying on the ground. He goes to pick it up, but is tied to a tree before he can do so. Kakashi appears and lectures him about obvious traps. Sasuke takes Kakashi's preoccupation to attack, but finds that this is also a trap. His location exposed, Sasuke flees. Sakura, worried about Sasuke, goes looking for him, but falls prey to one of Kakashi's genjutsu. Kakashi tracks down Sasuke, remarking that he is the only one left.

Determined to prove himself better than Naruto and Sakura, Sasuke attacks Kakashi. Unlike the other two, Kakashi has difficulty with Sasuke, needing to close the Icha Icha book he was reading so that he can avoid Sasuke's attacks. When Sasuke uses the Fire Release: Great Fireball Technique, Kakashi is forced to stop playing around and immobilises Sasuke. Naruto, meanwhile, frees himself from Kakashi's trap and tries to steal some lunch. He is, however, caught by Kakashi red-handed. Kakashi calls Team 7 together and states that there's no need for the three go back to the Academy, however he advises them to give up on becoming ninja. 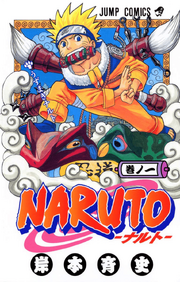