Naruto the Movie: Guardians of the Crescent Moon Kingdom (劇場版 NARUTO -ナルト- 大興奮!みかづき島のアニマル騒動だってばよ, Gekijōban Naruto Daikōfun! Mikazukijima no Animaru Panikku Dattebayo, literally meaning: Naruto the Movie Great Excitement! The Animal Panic of the Crescent Moon Island) is a 2006 film written and directed by Toshiyuki Tsuru. It is the third Naruto movie. It was announced on August 6, 2005, at the opening of Naruto the Movie: Legend of the Stone of Gelel. TVTokyo's website states that Guardians of the Crescent Moon Kingdom! was released in DVD format on April 25, 2007.[1] The movie takes place after Naruto episode 196, during the original anime's filler arcs. Footage of this movie is seen in the opening and ending credits for episodes 197 through 199. The events took place in this movie are held between the Third Great Beast Arc and the Konoha Plans Recapture Mission.

The movie premiered in Japan on August 5, 2006, while the English dubbed version premiered on Cartoon Network on November 8, 2008. It was then released on DVD in America on November 11, 2008.

The first 100,000 people to see the movie in certain theatres received a Naruto-themed yo-yo. It had a picture of Naruto on it, and, when spun, it lit up to look like a Rasengan.

Naruto Uzumaki, Kakashi Hatake, Sakura Haruno, and Rock Lee were assigned a B-rank mission to protect the prince of the Land of the Moon, Michiru. During Michiru's world trip, other escorts had been hired but had quit due to being treated poorly. The Land of the Moon was a very wealthy nation, so Michiru tended to buy whatever he wanted, and had a very materialistic world-view. His son, Hikaru Tsuki, also acted in much the same manner, which irritated Naruto.

On the dock of the ship, Naruto was eating a few bowls of ramen while Hikaru was playing his Gameboy. Sakura left to do something. As Hikaru approached Naruto, he snapped the chopsticks in half in Hikaru's presence. Hikaru carelessly proposed that Naruto be his vassal. Naruto was bewildered and cautious. Hikaru explained to Naruto that he'd give him anything he desired. Naruto refused Hikaru's offer because it was the equivalent of enslavement.

Hikaru kept insisting Naruto to accept but Naruto gets annoyed and tells him to stop looking down on people and Grow Up...Hikaru gets disappointed in this and shoots a Toy Arrow at the back of his headband...causing Naruto to turn red and become terrifyingly enraged...nearly becoming One Tailed Chakra in the Process...Naruto in rage snaps his Suction Cup arrow in half...Hikaru becomes Frightened and attempts to flee but Naruto with amazing Speed grabs him...and is fed up with his Attitude...Naruto explains that he doesn't care if Naruto caused a Injury Incident...Naruto claims It'll be worth it...punches Hikaru's head...causing him to cry...Naruto Informs Hikaru that he can't do anything freely as he think he can...Sakura then runs to Naruto for Hitting a Kid...Naruto is punched in the Water...

During the trip, the caravan stopped at a circus. When Hikaru took a liking to a rare sabre-toothed tiger, Chamū, which was featured there, Michiru ended up purchasing not only it, but the rest of the circus as well, placing it under the team's protection. Hikaru attempted to befriend the tiger, but found that it disliked humans. He lost interest in the circus, and, during a sea voyage, when a storm hit, he appeared unconcerned about the animals' well-being, causing Naruto to become disgusted at his lack of value for them. Upset by Naruto's view of him, Hikaru went out to help Chamū get to safety, and Naruto saved both of them after they were washed overboard. The next day, Naruto, Sakura and Lee become friends with Hikaru.

After returning to the Land of the Moon, the team found that the country had been taken over by Shabadaba, one of the nobles and a former friend of Michiru. Having hired three powerful ninja to assist him, Shabadaba had disposed of the king, and planned to do the same with Michiru and Hikaru, the remaining heirs to the throne. He ordered the military forces to kill them all, but the team was able to escape with the help of some soldiers still loyal to the king.

Escaping to a hidden cave, Michiru found that his father was still alive, but Sakura, although able to heal his petrified arm, was only able to keep him alive for a little while. The king revealed that he had suspected that something like this would happen, and had arranged for the journey to keep Michiru out of harm's way. Before dying, the king told Michiru and Hikaru that people are truly important in life, not material goods. During an attempt to escape the country by boat, the three ninja hired by Shabadaba attacked, disabling Naruto, Kakashi, Sakura, and Lee with reaction-dulling poison that slowed their reactions. The prince was captured, but the emergence of Naruto's fox chakra allowed him to repel the attacking ninja before the prince's son could be taken.

At the castle, Shabadaba's reasons for taking over the country were revealed to be purely material, the same things Michiru had considered important, as he intended to use the nation's wealth for himself rather than the people. Michiru was disgusted by Shabadaba's attitude, and realised the truth of what his father had said. Shabadaba decided to put him to death by a drawn out hanging: he had Michiru balance on a board of wood not strong enough to support his weight while wearing a noose, ensuring that, sooner or later, he would fall and be hanged.

With the help of the circus Michiru had purchased earlier, Kakashi's team made a rescue attempt with Hikaru and the rogue soldiers, infiltrating the palace by disguising themselves as members of the circus. One by one, Kakashi and his team fought individual battles: Kakashi fought the many soldiers in the courtyard, while each of the genin fought one of the ninja. Lee wielded a pair of nunchaku that had the ability to connect to other staffs hidden in his leg weights, creating weapons such as a long staff and a chain whip...After being Defeated Briefly...Naruto unleashed his fox-chakra once again and blew Ishidate away...He killed his opponent, Kongō, using Reverse Lotus. Sakura was able to dispatch her poison and genjutsu-using opponent, Karenbana, by shattering a chandelier to locate her by watching where she moved, and subsequently killed her with one punch. It turned out Karebana had worn too much perfume (which had helped Sakura locate her opponent while in a genjutsu by smelling for the perfume).

Naruto fought against Ishidate, the leader of the three ninja, while helping Hikaru reach his father. Hikaru shot an arrow, severing the rope around Michiru's neck, and Naruto's shadow clones caught the prince and his father. Ishidate was enraged, and attempted to kill Naruto, but Shababada ordered him to deal with Michiru. Ishidate powers up his petrification glove to the fullest as Shabadaba continues to tell him which target to pick. Enraged by his constant bicker, Ishidate accidentally petrifies Shabadaba. In the penultimate scene, Naruto, his leg disabled by his opponent's strange petrification technique, rode on Michiru's shoulders to attack with his Rasengan, which then reflected the light of the moon in such a manner that it grew and took on a crescent shape, creating the Crescent Moon Rasengan. He hit Ishidate with this attack, sending him flying and destroying Shababada's stone remains killing them both.

After Ishidate's death, Michiru took the throne of the country, and promised to rule as his father had done while starting on a diet, beginning weight training and once the country settles down he was going to see Hikaru's mother, Amayo. As Kakashi was immobilised due to overuse of the Sharingan, his team decided to take a vacation in the Land of the Moon while he recovers. Two weeks later, Kakashi has regained his strength and the team departs as the saviours of the Crescent Moon Kingdom. King Michiru decides to once again try reconnecting with his wife, now knowing what he shouldn't do.

As with many movies in the series, Naruto the Movie: Guardians of the Crescent Moon Kingdom is also available in several print versions: 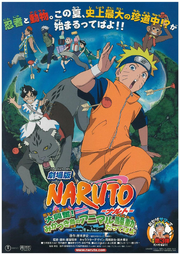