The movie was released on DVD on April 28, 2005. The film chronologically took place right after episode 101 "Gotta See! Gotta Know! Kakashi-Sensei's True Face!". The ending song is called Home Sweet Home and is sung by Yuki Isoya. The English version replaced this song with "Never Give Up" by Jeremy Sweet due to licensing restrictions. As a bonus, the short and non-canonical OVA, Konoha Annual Sports Festival!, was included with the Japanese release of the film.

Instead of the OVA included with the Japanese release, the American release included a short featurette entitled "World of Naruto", as well as a behind-the-scenes featurette afterwards with interviews with the main English cast and select members of the main Japanese cast. The OVA did, however, appear in the U.S. DVD release. The DVD was released September 4, 2007.

The movie begins with a heroine previously unknown in the Naruto continuity: Princess Fūn (Princess Gale in the US version). Fūn's nemesis, Mao, challenged her group with an army of undead soldiers. His dark intentions seemed to prevail; that is, until Princess Fūn and her cohorts, Shishimaru, Brit, and Tsukuyaku, unleashed the power of the Seven-Colour Chakra upon him. They saved the day, and Naruto, watching from afar, couldn't have been more elated.

As it turned out, Naruto was actually watching the scene in a movie, as was the rest of Team 7. However, the audience of the movie began to throw objects at the team for making so much noise whilst arguing with the cinema manager. As the team is forced to leave the theatre without being able to see the ending, suddenly the actress who played Princess Fūn, Yukie Fujikaze passes by on horse, being chased by armoured men on horses as well. As Naruto, Sakura and Sasuke manage to easily defeat the attackers, it turns out that they were actually stuntmen disguised as bodyguards, led by Yukie's manager, Sandayū Asama. As Kakashi comes in to inform them of this misunderstanding, he reveals that he had sent them to watch it as preparation for their next mission: to escort Yukie while the crew made the next movie in the Land of Snow. As it turned out, Yukie was actually the princess of the Land of Snow, Koyuki Kazahana. The land had been taken over by her uncle, Dotō Kazahana and his three-man-team of rogue ninja when she was a child. Dotō wanted Yukie's crystal necklace in order to unlock the Land of Snow's treasure, which Yukie's father, the daimyō had hidden before being assassinated. As many citizens doubted she had survived, apparently Kakashi was responsible for her rescue during the day of the revolt. Sandayū would eventually find her on stage one day and considered himself lucky to have become her manager. After the discussion, the director would decide that the filming would continue, intrigued by the idea of having a real princess play the princess in the movie.

Eventually, Dotō would arrive with his team and some ninja subordinates by train after melting the ice that covered the tracks to an old railway system. As Sandayū, who leads a group of 50 samurai attempt to charge after them, the mortar-mounted compartments release huge waves of kunai massacring the entire brigade. Sandayū, clinging on to life passes away after telling Yukie not to cry for him. Suddenly, Dotō's blimp manages to capture Yukie and flies away, but not before Naruto manages to cling on with a kunai attached rope. As the two are taken to his mansion, Kakashi, Sasuke and Sakura eventually regroup with them. After various battles between Team 7 and the rogue ninja, resulting in the death of all of the latter and Nadare, Dotō succeeded in obtaining Yukie's crystal necklace, only to discover that the "treasure" of the Land of Snow is a generator designed to melt the snow and thus bring Spring to the snow country. After a confrontation with Sasuke and Naruto, Dotō was then killed by Naruto with his Rasengan in a manner reminiscent of Princess Fūn's defeat of Mao, involving "rainbow chakra".

With the rogue ninja all gone, Yukie decided to resume her position as the princess of the Land of Snow, which would eventually become the Land of Spring after the technology behind the generator was perfected. Despite being a princess, Yukie intended to continue her role as an actress. At the very end of the movie, Naruto, who had desperately wanted an autograph from the actress, was given an envelope from Sasuke afterwards, who received shocked looks from the other members of Team 7, including Naruto himself. Inside the envelope was a signed photograph from Yukie. The picture was of a bandaged up (and apparently unconscious) Naruto in the hospital, who was receiving a tender kiss on the cheek from the actress.

At the end of the credits, the crew that had made the Princess Fūn movie said cut, and all cheered in unison.

As with many movies in the series, Naruto the Movie: Ninja Clash in the Land of Snow is also available in several print versions: 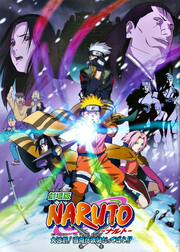