Naruto to Boruto: Shinobi Striker, developed by Soleil Ltd. and published by Namco-Bandai, is a multiplayer online video game released in North America and Europe on PlayStation 4, Xbox One and Microsoft Windows on August 31, 2018. Players go head-to-head in 4 versus 4 battles, with all eight players fighting simultaneously. The game also lets the player create their own character for the very first time. The timeline of this game takes place when Naruto is the Seventh Hokage and Konohagakure are hosting the Chūnin Exams. It includes English and Japanese voices as well as text in English, French, German, Italian, Spanish, Russian, and Polish.

Characters are defined into four categories: Attack types for close range, speed, and offence, defence types rely on strong attacks with an emphasis on defending allies and using techniques to gain advantages in different game modes. Ranged types excel at firing large projectiles for the team. Heal Types are characters designed to support the team with healing jutsu or their own special techniques.

Players will compete in multiplayer match types such as Barrier, Base, Combat, and Flag Battle which will rely on teamwork and skill to see which team comes out on top. A Survival match type was later added which tested players abilities as individuals in a Free For All. Players can also team up to take on AI enemies such as tailed beasts in the Sub-Mission mode. The original characters will serve as mentors who the player can independently choose to learn jutsu from and equip to their arsenal for use in combat for their player avatar.

Each stage contains its own daytime and night modes 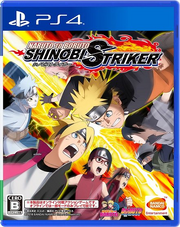