"They Who are Called Rivals"

Over Sakura's objections, Naruto and Sasuke head to the hospital roof to fight. Regarding the battle casually, Naruto asks Sasuke to put on his Konoha forehead protector. Sasuke refuses since that would mean that they are equals, upsetting Naruto for not acknowledging himself as Konoha ninja. Naruto surrounds Sasuke with shadow clones, which Sasuke destroys with his Fire Release: Great Fireball Technique. As the smoke clears Sasuke sees that one clone has survived and is helping Naruto form the Rasengan. He uses his own Chidori and they charge at each other. Sakura screams for them to stop. 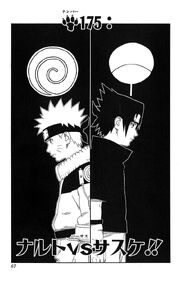