Natsu was a maid of the Hyūga clan, and was the caretaker of Hanabi Hyūga. One day when Hanabi wanted to play with her sister, Natsu reminded her that Hinata was busy with her training. The next morning when they were taking a walk through the village, they witnessed Naruto Uzumaki being scolded by a villager. As Hanabi wondered why Naruto was treated as an outcast, Natsu told her to shun him. Later, she watched over Hanabi finishing her studies, and told her to finish them before she could play with Hinata.

Natsu is a kind and responsible person, having been tasked with looking after Hanabi Hyūga. Despite this, like most of the villagers in Konoha who only saw him as the host of the beast or even the beast itself that once devastated their home, she treated and viewed Naruto poorly when he was a child.

Natsu has short, dark green hair and like the rest of her clan, she has large white eyes. Attire-wise, she wears a full-length kimono with a white apron on top along with the village's forehead protector around her forehead. While she was with Hanabi and Hiashi while returning to Konoha from their meeting with the Taketori, she wore a navy blue kimono and an obi in the same colour with an orange cord around it.

As a member of the Hyūga clan, Natsu possesses the Byakugan which grants her an almost 360° field of vision, x-ray vision, and the ability to see through the chakra pathway system.

Natsu accompanied Hanabi and her father Hiashi to a meeting with the Taketori clan. When they returned to the village, they were shocked to learn that it was under attack by the Akatsuki.

In the aftermath of the Fourth Shinobi World War, Natsu attends the mass funeral held in Konoha, alongside Hiashi and Hanabi. 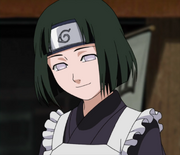