He was the younger brother of Tsunade and the grandson of Hashirama and Mito. He was also the grandnephew of Tobirama. He shared his dream of becoming Hokage with his sister on his twelfth birthday, who gave him their grandfather's necklace in the hopes that it would help him achieve his dream. The day after his birthday, Nawaki died in battle after running into an explosive trap. When Tsunade rushed to him, Orochimaru noted that his body was so heavily mutilated that it was beyond recognition. The necklace was retrieved by Orochimaru and returned to a devastated Tsunade.

In terms of personality, Nawaki was noted to be very much like Naruto Uzumaki as well as Dan Katō. He too held the dream of becoming Hokage and was proud of the title and his grandfather's legacy. As the First's grandson he wanted to earn the title of Hokage and protect the village that his grandfather had founded. He was also described as someone that hated losing and, like Dan, was an honourable man of justice.[1]

Nawaki had short light-brown hair, hazel eyes and distinct blushes on his cheeks. For attire, he wore a dark teal poncho top and light green pants. He was also gifted with the First Hokage's necklace which he wore around his neck. According to Dan Katō, Naruto bears a striking resemblance to him.[2]

Decades after his death, Orochimaru would offer to Tsunade the opportunity to bring Nawaki back to life, together with her lover, Dan Katō in exchange for healing his arms. The reincarnation would require a human sacrifice, though. She ultimately refused, realising that Nawaki and Dan would not want her to sacrifice the lives of others in exchange for theirs. 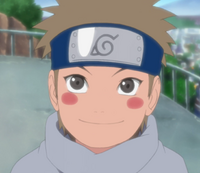