Nishi (西, Nishi) is a villager from Konohagakure who worked at the Ramen Ichiraku.

Nishi, using the name Nishikawa, once worked for the circus now owned by Michiru Tsuki in the Land of the Moon alongside Matsu. He and Matsu later moved to Konohagakure.

Nishi has short black, spiky, hair and black eyes. He has a small rope-like piece wrapped around his forehead acting as a headband. He wears a white chefs uniform that is the same as Matsu's.

Nishi has been described as not being very smart and he is also very rhetorical.

He and Matsu were hired by Teuchi when Ayame went on vacation. He trips while serving Naruto Uzumaki, pouring the scalding ramen on Matsu.

Nishi appeared alongside Matsu in the circus. They were charged with helping the other circus members distract Shabadaba and his men so Team 7 could rescue Michiru Tsuki. 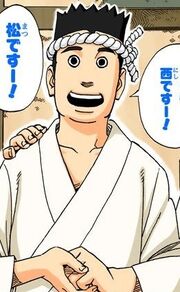