Nobori (ノボリ, Nobori) is a former academy student of Konohagakure.

Nobori cares deeply about his friends and wants to always protect them.

He was one of Konohamaru's classmates at Academy. When the Third Hokage asked the class who they would protect, Nobori agrees with Daichi saying that he would protect his friends.

In the anime, during a survival exercise, Nobori was placed on a temporary team with fellow Academy students Daichi and Matsuri under the leadership of Hinata Hyūga.

After being thrown out of their class because of the change that there were bombs located at the academy, he went to a kunai training area with Daichi, Kōji and some other kids. Soon, Rock Lee, Naruto Uzumaki and Chōji Akimichi interrupted them, believing that there was a bomb planted inside the wood. 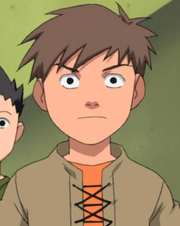