Nowaki is a character from the novel Sasuke Shinden: Book of Sunrise.

Nowaki was originally from the Land of Hot Water and was left as an orphan after his family was killed by the Dark Thunder Group. Soon after, when nothing had been done to bring his family's murderers to justice, Nowaki grew impatient and angry, provoking him to leave his village and became a missing-nin. At some point, he met Chino and the two began travelling together. They went on to develop a close relationship due to their mutual goal of getting revenge on the villages and people they felt had wronged them.

Nowaki first appears as a polite and shy individual, but he actually harbours deep hatred towards those of higher authority. He presents an innocent and childlike façade to gather information on his intended victims and, once he lets loose this persona, he becomes violent and eager to challenge his opponents. When he first meets Sasuke Uchiha, Nowaki treats him with respect, but once Sasuke detects deception from him, Nowaki shows how he already despises Sasuke for interfering with his and Chino's plans when he was once a criminal himself. The only person Nowaki truly cares about is Chino, whom he looks up to as an older sister.

Despite his young age, Nowaki is a skilled shinobi. He is so skilled that he is able to hold on his own when he was fighting Sasuke.

Nowaki has an affinity for Wind Release.

Nowaki and Chino are staying at a bamboo village in the Land of Hot Water when Sasuke arrives to gather information on the disappearance of Konohagakure, Kumogakure, and Kirigakure shinobi. After preventing the villagers from attacking Sasuke in a misunderstanding, Nowaki and Chino tell him about the Dark Thunder Group and all the recent attacks the group was responsible for. They take Sasuke to another nearby village to gather information on the group when it attacks the bamboo village. Nowaki doesn't participate in the fighting that ensues.

When Sasuke leaves to meet with Orochimaru, Nowaki and Chino also leave. He finds them at an isolated island with some of the missing Kumo and Kiri shinobi. When they cut themselves, Sasuke detects unusual chakra from their blood. Realising Sasuke is suspicious of them, Nowaki attacks him first by using wind style and create a typhoon with water. Sasuke summons Aoda to escape from the typhoon and uses Lightning Release to electrocute Nowaki, which injures him. With Nowaki defeated, Chino steps in, uses her Kerryūgan to distract him, and they flee.

They take refuge in the Valley of Hell, but are found by Sasuke soon afterwards. Nowaki doesn't take part in the battle between Sasuke and Chino due to his injuries. Ultimately, Chino and Nowaki are swayed by Sasuke's words of working for peace and having friends that saved him from darkness, and they surrender. After being dropped off at prison, Nowaki and Chino are offered to work for Kumogakure and Kirigakure in exchange for their freedom, which they agree to. 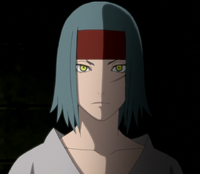