Pakura was Maki's teacher and would regularly train with her. During her lifetime, Pakura, who was also known as the Hero of Sunagakure, was considered a part of negotiations with Kirigakure, according to the village higher ups. She took her last breath while cursing her village and shinobi.[1]

In the anime, Pakura's background is further explained. Pakura was sent on a mission to stop Iwagakure's plans during their feud with Suna. She successfully accomplished the mission and was hailed as a hero by the village. Some time later, Pakura was sent on another mission to Kirigakure, to act as an ambassador, but she was betrayed and killed by the ambush they set. After her death, Rasa and the seniors pinned the blame on Iwagakure for her death.[2]

Pakura seems to have a moral code of sorts, shown when she was surprised that she was going to fight what she deemed "children".[3] In the anime, it is shown that she is resentful towards both Suna and Kiri for the treachery that led to her death. However, after seeing Maki and the resolve of Maki's comrades, Pakura decides to "give the children a chance to change the future" before her personality was wiped out again. While alive, she believed that loyalty for friends, family and village makes a shinobi strong.[2]

Pakura was a fairly tall kunoichi. She was fair-skinned with pupiless brown eyes. She had green hair that she tied in a bun on top of her head with a hair needle running through it and one short and long strands of hair with orange tips framing each side of her face. Her typical attire consists of a sleeveless, backless top and short tight pants, with two lapels on the front and the back. She wears an obi around her waist, as well as purple arm-warmers which extend up to her shoulders, and has bandages around her tights and ankles. Like all reincarnated shinobi, the only changes in Pakura's appearance were that of grey eye sclerae.

Pakura was a renowned kunoichi whose skills earned her enough fame during her life that Kabuto chose to reincarnate her to fight for Akatsuki. In the anime, she was shown to be a highly perceptive fighter, able to see through most deceptions and react quickly. She was also a skilled close-range fighter, able to fight back a kenjutsu specialist like Omoi only armed with a kunai.[2]

She possesses a kekkei genkai known as Scorch Release.[4] She is the only known person to have this kekkei genkai. By combining two chakra natures, hinted to be fire and wind,[5] she can create heat orbs that "mummify" her enemies, killing them seemingly by evaporating all the moisture in their bodies. Pakura displays this ability when using Scorch Release: Extremely Steaming Murder;[6] combined with her incredible agility, she managed to kill many Allied Shinobi Forces members in a short amount of time. In the anime, she combined all of her heat orbs into a giant ball which was strong enough to completely scorch a large portion of a forest.[2]

In preparation for the Fourth Shinobi World War, Pakura was reincarnated by Kabuto Yakushi to fight against the Allied Shinobi Forces, before being mobilised alongside Gari, Toroi, Haku, and Zabuza Momochi. Ambushed by the Surprise Attack Division, Pakura likely sustained damage due to the explosive tags carried by Sai's ink birds, though she would have quickly regenerated from such an attack. Hesitant to attack people who appeared in her eyes to be just "children", Pakura was forced to storm the recently grounded opposition nonetheless, but was fortunately intercepted by a member of the Third Division.

After Kabuto erased her consciousness, an unthinking Pakura launched into an assault with her Scorch Release: Extremely Steaming Murder technique, mummifying several shinobi in her wake. She and Gari are then used as mediums to summon the previous generation of the Seven Ninja Swordsmen of the Mist to overwhelm the enemy. Accomplishing this, both retreat to a safe distance to await further orders, as the swordsmen begin their concealed massacre.

In the anime, as dawn broke on the war's second day, Pakura had reappeared on the battlefield. Pakura located the squad led by Monga and mummified the shinobi. Pakura was surprised to see her grown student, Maki, and explained she wanted to "vent her frustration" on her manipulators and her betrayers. Pakura revealed her secret mission to Maki and also revealed that she was killed by the Kirigakure ninja in an act of treachery, which Sunagakure had agreed to. Though a Kirigakure kunoichi by Maki's side explained her village turned over a new leaf and has changed for the better since acquiring a new Mizukage, Pakura declared that it still does not erase the village's past sins.[2]

As the squad hid from her, Pakura incinerated the area in an attempt to kill them. Pakura later found the shinobi and Maki tried to convince her teacher that they could change the future but her plea fell on deaf ears. Omoi and Zaji arrived to stop Pakura from killing the squad, and fought her off until Gari intervened in the fight. Seeing Maki's growth, Pakura had a change of heart and kept Gari in place with her flame orbs, allowing her student's squad to flee. Starting to feel at peace, Pakura's consciousness faded away as Kabuto eradicated hers and Gari's personalities once more.[2]

By the time Kakashi Hatake and Might Guy departed for Naruto Uzumaki's location, Pakura had been sealed by the Third Division.[7] However, in the anime, she, along with Gari and Mangetsu, was able to retreat before being sealed after temporarily battling with the Third Division.

Later, with the release of the Impure World Reincarnation technique, a light of sorts encased Pakura's sealed body as the technique was dispelled, and her soul was returned to the afterlife. In the anime, Pakura was still active, battling Maki and numerous Suna shinobi. As her soul began to ascend, Pakura told her student to not die in vain.[8]

Pakura is a playable character in the following video games: 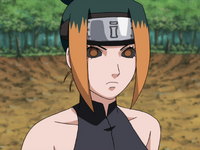