The Paw Encyclopaedia is a book filled with paw prints of cats collected by Itachi Uchiha and Sasuke Uchiha in their youth. The paws in the encyclopaedia range from nimble house cats all the way to the Two-Tails. It was originally a game Itachi conjured up to occupy Sasuke, who would often throw tantrums, while he bought weapons for the Uchiha clan. At first, Itachi didn't intend for the game to be serious, but Nekobaa later turned it into an actual book. The last paw print collected was that of Nekomata, which was obtained by Sasuke Uchiha. 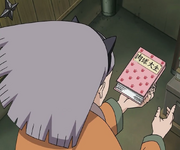