View source
watch 01:32
Wiki Targeted (Entertainment)
Do you like this video?
Play Sound

Post-Kawaki Arc
"Place to Belong" (居場所, Ibasho) is chapter 60 of the Boruto manga.

Sai, Shikamaru, and Ibiki discuss Code's ability, as explained to them by Amado. The Claw Marks he creates tags locations, allowing him to instantly travel between them, which Shikamaru compares to the Flying Thunder God Technique despite it not being space–time ninjutsu. Sai reports that no marks having been found inside the village at the moment, but four marked spots have been discovered near the outer wall. He has others looking for more, and Shikamaru is concerned they're decoys to spread them thin. Ibiki reports the other villages have also found marks, but still no sign of Code, which exasperates Shikamaru. Sai adds that none of the captured Outers, but their interrogations yielded nothing useful. Their only viable avenues are to continue investigating the marks, and the targets of Code's revenge for Isshiki's death. Kawaki observes them from the Hokage Rock, as well as shinobi assigned to monitor him. Sumire asks what are Amado's plans for Kawaki after restoring his Kāma.

Amado is vague, saying it's a personal matter with Kawaki, and assuring her he has no intention of wronging Konoha. Noting a container by him, she asks what he's working on. Amado says it's something he has already run by Katasuke, that should result in a powerful ally for Konoha. Code grows impatient with Daemon riding on his back, and asks Ada for assistance. She's glad the two of them have become friends. Daemon notices Bug sneaking away, and jumps on him. He screams, asking where Bug is going. Code attempts to mark Daemon, only succeeding at marking Bug, Daemon's ability reflecting the marks at him without conscious intent. Code claims he's demonstrating his ability, finding it quicker than explaining it as he pulls Bug through a mark. He explains only he can move through them, and at most take one other with him at a time. Bug thanks him for removing him from Daemon's grasp, but Code says he was only making a demonstration. He asks Daemon for a more detailed explanation of his ability, but Ada stops Daemon from giving one. Code asks if she doesn't trust him, but she says what she told him is enough. They just met and she needs more time before showing him everything. He asks if she has other abilities she hasn't demonstrated, and she thinks that would be interesting. Daemon does as Ada says and reveals nothing. Kawaki notices civilians staring at him, and recalls Shikadai's warning. At home, Boruto completes a week taking Amado's medication, but notices no change. Hinata asks him about Kawaki, noting he's never been late for dinner. Naruto finds Kawaki, asking if the water and once rice ball he bought are all he's having for dinner. Kawaki claims he's bored of Hinata's food, but Naruto points out he always cleans the plate. He says he likes that spot, gazing down at the village, but he thinks there's no place for him in it. He thinks Jigen or Isshiki were right about him. Naruto picks Kawaki up to take him home, calling him a son. At home, the Uzumaki have prepared a proper welcoming party for him, the vase he fixed prominent on the table. Kawaki tells Himawari she should have used the vase he bought, the one he fixed looking ugly with all the cracks. She says the vase is even more special to her now. Boruto says he has something for him, and shows him his forehead protector. Kawaki points out he's not an official shinobi, but Boruto counters he has started training, and that he, Sarada, and Mitsuki consider Kawaki a team-mate. Kawaki says Boruto won't have one if he accepts, but he says he has Sasuke's, so Kawaki should keep his until he has his own. Hinata and Himawari think it suits Kawaki, but Boruto finds him dorky with it. Himawari suggests he wear it around his neck, like she has seen others doing it. Later, Naruto tells Kawaki he does belong, and that it he doesn't feel it, if someone like him can't live at ease, that Naruto has failed as Hokage. In his bedroom, Boruto shifts his attention from the medication to his Kāma. Kawaki thinks of Amado's offer to give him a purely offensive Kāma, and dismisses it, thinking there's still one thing he can do to protect Konoha and Naruto. 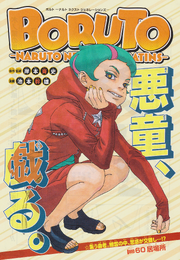