Boruto is incredulous that Isshiki would absorb so much fire, and Kawaki explains that he shouldn't be able to, since those are natural flames. Isshiki is combating the flames, but he's shrinking them instead. Amado explains that Sukunahikona can shrink and restore anything but living things, with the exception of the jutsu user, and assures Shikamaru they counted on that happening for them to strike. Jigen's body begins to run out of chakra, so Isshiki can no longer shrink the flames, which begin consuming him. Amado reveals that he was still recovering from the fight against Naruto and Sasuke, which limited how much he could shrink the flames. Naruto wonders if that's Isshiki's end, but Sasuke points out that he still has two Kāma, so he can reincarnate twice. Sasuke also finds it strange, as killing Jigen would make Kawaki Isshiki's sole remaining vessel as he intended. Shikamaru wonders if the entire thing was a setup from the start. Kawaki enters the interrogation room and attacks Amado, but is blocked by Sasuke. Amado assures everyone that it's a misunderstanding, and that he can explain. He says that Jigen's body will perish from the flames in a few minutes, causing the Kāma to automatically begin the reincarnation process, something even Isshiki can't control. He adds that another difference between Jigen and Kawaki is that Jigen's Kāma had time to be fully extracted, so Isshiki can be reincarnated in him, while Kawaki's Kāma has yet to fully decompress, so he can't be a vessel for Isshiki yet.

Shikamaru takes it to mean that Isshiki won't be able to return for a while. Boruto asks if Amado intends to kill Kawaki before his Kāma can fully extract, which Amado does confirm is an option, incensing Naruto. Amado instructs them to watch the feed so they can witness Isshiki's true form, as even a dead body can be used as a vessel for an Ōtsutsuki. He notes the fortuitousness of Kawaki's presence, wanting to confirm something for himself. Kawaki's Kāma activates and spreads through his body, and suddenly vanishes. Amado has Boruto confirm that the Kāma on Kawaki's hand has vanished as well. The flames consuming Jigen's body all shrink in an instant. Amado reveals that when an Ōtsutsuki reincarnates, all of that Ōtsutsuki's implanted Kāma are erased, something he believes to be a safety feature to avoid the creation of duplicates with the same personality. The others understand that now, without a single implanted Kāma, Isshiki can be permanently killed. Isshiki appears in his true form, and begins shrinking everything in his and Koji's vicinity, including the scout toad, which costs Konoha their video feed. Amado considers his endeavour mostly a success, and that Koji served his function. Naruto gets the feeling Koji was fighting with the intent of fully taking Isshiki out, and is concerned about him for reasons he can't understand. Isshiki says all people have predestined fates, and Koji's mask breaks. He understands that Amado clung to the fate of Jiraiya, which is why he created Koji as his clone, and says his death was also predestined by the same genes. 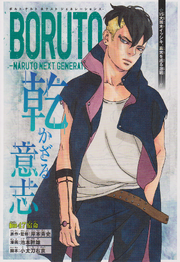