Using his chakra,[3] Gaara breaks open the earth and uses his sand to pull a target up to two hundred metres underground; targets are dragged down so quickly that they cannot escape it. Because of the depth that they're buried at, targets are rendered unable to move even a finger. Gaara then applies additional pressure to them with the sand, crushing them to death. Tō no Sho likens this technique to the larva pits of antlions.[1] 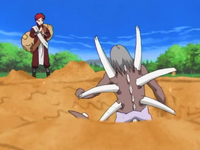