After activating level one of their cursed seals, the Sound Four attack Raidō Namiashi and Genma Shiranui. When they do not return their teammates, Iwashi Tatami and Shizune, go looking for them and find them near death. The Sasuke Recovery Team, detecting the battle while pursuing Sasuke, realises that Sasuke has escorts. They near the Sound Four's location and find traps in the area. Knowing they are probably resting after their battle, the Retrieval Team prepares to ambush them. 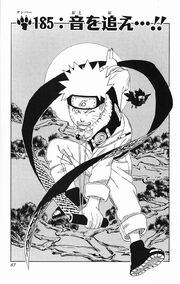