"Getting Angry with a Loud Voice…!!"

Team Guy tries to break into the Akatsuki lair, alerting Akatsuki to their presence. Elsewhere, knowing they are running out of time to save Gaara, Naruto picks up the speed. Chiyo asks Kakashi why Naruto is so committed to saving Gaara. Just as Gaara is the jinchūriki of Shukaku, Naruto is the jinchūriki of the Nine-Tails, a similarity that transcends the fact they are from rival villages. Touched, Chiyo reveals that she was the one who sealed Shukaku into Gaara's body, and wonders if perhaps ruining Gaara's life to give Sunagakure a weapon was a mistake. Team 7 joins up with Team Guy. 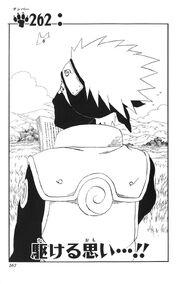