Rai Uchiha (うちはライ, Uchiha Rai) was a shinobi of the Uchiha clan.

Born to the Uchiha clan, Rai was able to awaken the Sharingan in his youth, as well as his own Mangekyō Sharingan.

During the continuous struggle between shinobi clans, Rai and his clansmen faced an opposing force who quickly wiped out Rai's comrades with a trap. However, Rai nullified the outcome by sacrificing his left eye in order to use Izanagi. With the enemies slaughtered, he boldly declared that the Uchiha clan was invincible due to the powerful dōjutsu.

His prowess in using the forbidden technique made him the leader of the small group of his shinobi until he was challenged by Baru Uchiha, who was able to kill Rai by using Izanagi himself.

Rai was a power-hungry man who got obsessed by the abilities Izanagi granted him, even after overusing its power and going blind in his left eye. He even proclaimed it as a technique that would make his clan invincible. According to Baru Uchiha, Rai had the disliked habit of commanding others around. Rai also believed that in the shinobi world, results are all that count and due to his power, he aimed to rule not only the Uchiha clan, but the entire shinobi world by himself, proving that he was an ambitious man, if not an out right megalomaniac.

Rai was a young man with shoulder-length black hair,[1] and dark coloured eyes. He wore the standard mantle of the Uchiha clan with its symbol emblazoned on the back. He also wore an "X" shaped harness and belt that held multiple pouches and a large equipment pouch on the back. He also had a sword strapped to his back. His Mangekyō Sharingan was in the shape of a black spiral around his pupil.

Having been in command of a group of his clansmen, it is presumable that Rai had capable leadership skills. He was a capable swordsman, even with one eye blinded. He also showed a noticeable amount of physical strength, being able to shatter the ground with a single strike of his sword.

As an Uchiha, Rai was able to use the Sharingan. From it, he could use one of its most forbidden techniques Izanagi. He was so adept in using the powerful technique, he was able to extend its range from his personal space and target other individuals instead, affecting even an entire battlefield. Rai also had access to the Mangekyō Sharingan. Its design was three thin lines inwardly swirling towards the pupil and three thicker swirls in the same manner. 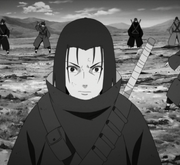