watch 00:55
Who is Raiga Kurosuki?
Do you like this video?

Raiga Kurosuki (黒鋤雷牙, Kurosuki Raiga), renowned as the Thunder of the Hidden Mist (霧隠れの雷人, Kirigakure no Raijin), was a jōnin from Kirigakure as well as a member of the Seven Ninja Swordsmen of the Mist. Prior to his defection from the village, he also served as an Anbu.

At some point, Raiga joined the Seven Ninja Swordsmen of the Mist, where he wielded the Thunderswords: Kiba. At some point after the Third Shinobi World War, Raiga and his fellow swordsmen encountered Might Guy, Ebisu and Genma Shiranui on a mission. The shinobi managed to flee until they were cornered, at which point the timely arriving Might Duy saved them by sacrificing himself to use the Eight Gates Released Formation,[2] killing four of Raiga's allies in the anime.[3] At some point unbeknownst to him, Raiga became the father of Buntan, whose mother despised him.[4]

Years later in the anime, Raiga served as an Anbu where he was tasked with finding spies that had infiltrated Kirigakure. While looking for his target, Raiga met Ranmaru, a disabled boy who came to act as additional eyes and ears for Raiga in exchange for protection being carried upon Raiga's back. Ranmaru would become the only person Raiga cared about. Sometime after his defection, Raiga enslaved a town and forced its villagers to work in its mines, also assembling some followers (including Karashi) to form the Kurosuki Family. Besides him, his followers wore a hooded robe, gloves that sprout claws from the back of the hand, and enforced his laws. Should a law of his be broken, whoever committed the "crime" would end up being buried alive.

During his life in Kirikagure, Raiga was a very tormented, cruel and lonely individual asking every day to look for the meaning of life, killing unscrupulously and randomly anyone during his missions without any precise purpose in mind, and began to cry in his heart whenever he killed someone. After he met Ranmaru and deserted Kirigakure, his goal was to take care and protect Ranmaru at all costs with Raiga serving as Ranmaru's body and Ranmaru being Raiga's eyes and ears, thus allowing him to see and explore the world that he could never do alone, which resulted in both finding their meaning of life. One of Raiga's pastimes is his love for funerals, often to the point of burying his victims alive. Also, for unknown reasons, he hates Zabuza, Kisame, and all of the other Seven Ninja Swordsmen of the Mist.

Raiga had blue eyes with a darker ripple around the pupil, waist-length green hair with the top two bangs falling down on his cheeks on each side, and having dark, full lips. When he lived in Kiri as an Anbu, he wore the traditional Kiri Anbu uniform with a white mask with thin, short curved eye-holes, a mischievous smile and two red wave design on the top and bottom on the right side, as well as the Kirigakure symbol on the forehead.

After his defection, he wore a grey hooded mantle with three red stripes where he hid Ranmaru in a nest-strapped to his back. Under his mantle, Raiga wore a dark-brown sleeveless vest falling to his knees where the inside was purple, light brown belt, a light grey pants and, like all the Swordsmen of the Mist, he had bandages covering most of his body, his neck down to his chest, including his arms and his shinbones.

As a former member of the Seven Ninja Swordsmen of the Mist as well as an Anbu-ranked shinobi, Raiga is one of the most powerful shinobi ever produced by Kiri.

Raiga wielded Kiba, twin swords imbued with lightning. Considered the sharpest swords ever made, they can cut through anything, Raiga could use them with great dexterity, able to defend himself against Lee's attacks.[5] He can connect them at their hilts to form a larger double-bladed sword, effectively increasing the weapon's size and versatility to perform different and more powerful blade-wielding techniques.

Even without his swords, Raiga can use Lightning Release, as he did to cause a Rock Avalanche in order to bury his foes. He is also proficient in Water Release and is capable of blinding his targets by blanketing the area in a thick mist and making them more vulnerable.

When Raiga tried to bury Rokusuke, his group ran afoul of Naruto Uzumaki, Rock Lee, Neji Hyūga, and Tenten. He later engaged them using the Hiding in Mist Technique while Ranmaru negated Neji's Byakugan. While unconscious from one of Raiga's attacks, Lee manages to fight him off despite this. When Naruto asks if he knows Zabuza Momochi and Kisame Hoshigaki, Raiga stated that he hated those two, along with the rest of the seven sword members. Naruto then manages to hit him with his Rasengan, causing him to fall from a cliff and be left unconscious.

When Karashi brought Ranmaru to where Raiga's body was, his energy awakened Raiga, who thought Ranmaru died trying to revive him. When Tenten arrived, she fought Raiga but was defeated. Raiga then had Karashi lure Naruto, Lee, and Neji to where he is. Raiga manages to trump the three until the curry Tenten and Karashi fed them enabled them to be able to fight him again. When Ranmaru acts on his beliefs and tries to convince Raiga to stop fighting, Raiga feels betrayed. Upon being knocked off a cliff by Naruto, Raiga kills himself in midair with one of his own bolts of lightning, but not before saying "Ranmaru, you're free now", presumably stating that he now believed that Ranmaru can live on since he has friends and that he can live a life without fear or loneliness. 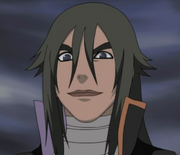