Ranmaru uniquely possessed a dōjutsu kekkei genkai which, when activated, causes his eyes to glow red in colour. It grants him abilities similar to those of the Byakugan, which his own dōjutsu has been likened to.

This dōjutsu grants the wielder a number of abilities that revolve around extrasensory perception, including viewing and hearing events from vast distances and clearly seeing through obstructions. Likewise, Ranmaru's vision can easily locate and track others by sensing chakra, picking up chakra from undefined distances. The dōjutsu has the ability to counter another's visual prowess as it can completely hinder the ability to see chakra and an individual's ability to overcome genjutsu. Notably, it can also perform elaborate genjutsu that can deceive sensory abilities. On separate occasions, Ranmaru was either able to mask his own chakra pathway system or perfectly fabricate multiple ones. In either case, Ranmaru does this by manifesting a red dust around him or around his target.

With it Ranmaru has heightened perception and analytical powers, being able to uncover and thoroughly comprehend hidden details. Upon encountering Raiga, Ranmaru admitted that he could read his innermost thoughts. He can also detect changes in an individual's chakra or see one's life force, which he can use to predict the opponent's next move or accurately determine if someone was alive — well-beyond the Byakugan's power to detect life through their active chakra networks. In addition to this, Ranmaru is able transfer part of his own life force to completely heal someone who is mostly dead. 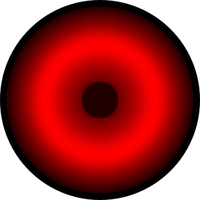